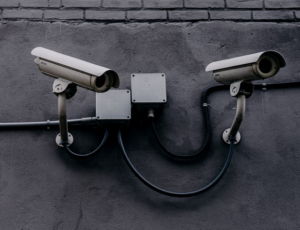 Three years ago, a U.S. District Court in Minnesota sentenced Paul Hansmeier to 14 years in prison.

Hansmeier and Steele’s individual responses to the criminal prosecution couldn’t have been more different. Steele cooperated with the prosecution from the start. This resulted in a relatively modest 5-year prison sentence, including a probation period, and he left prison a few weeks ago. Hansmeier decided to go on the offensive.

Hansmeier initially denied any wrongdoing and later appealed his sentence. The convicted lawyer also launched a flurry of petitions and new lawsuits, hoping to aid his case or reduce the prison term.

A few weeks ago, the former lawyer filed a new request to reduce his sentence. Hansmeier says officials have treated him harshly, including a 122-day stay in solitary confinement.

“Specifically, Hansmeier engaged in petitioning activity and, in response, prison officials threw him in an isolation cell for five months,” he informed the court, writing in the third person.

“While he was in the isolation cell, Hansmeier was limited to one phone call to his family per month, he was locked in a tiny, windowless room where the light stayed on 24 hours a day, he was prohibited from receiving a newspaper or any other periodicals and he was prohibited from having attorney-client privileged calls.”

These events are just a fraction of the punishments allegedly suffered by Hansmeier, at least according to Hansmeier’s own reporting of events. If the allegations are accurate, concerns over Hansmeier’s treatment would be warranted, despite his past activities.

These concerns were recognized by journalist Joe Patrice from Above the Law, who previously worked as a litigator and has an extensive legal background. In his coverage of the matter, Patrice suggested that Hansmeier’s treatment could potentially qualify as torture, according to the United Nations. 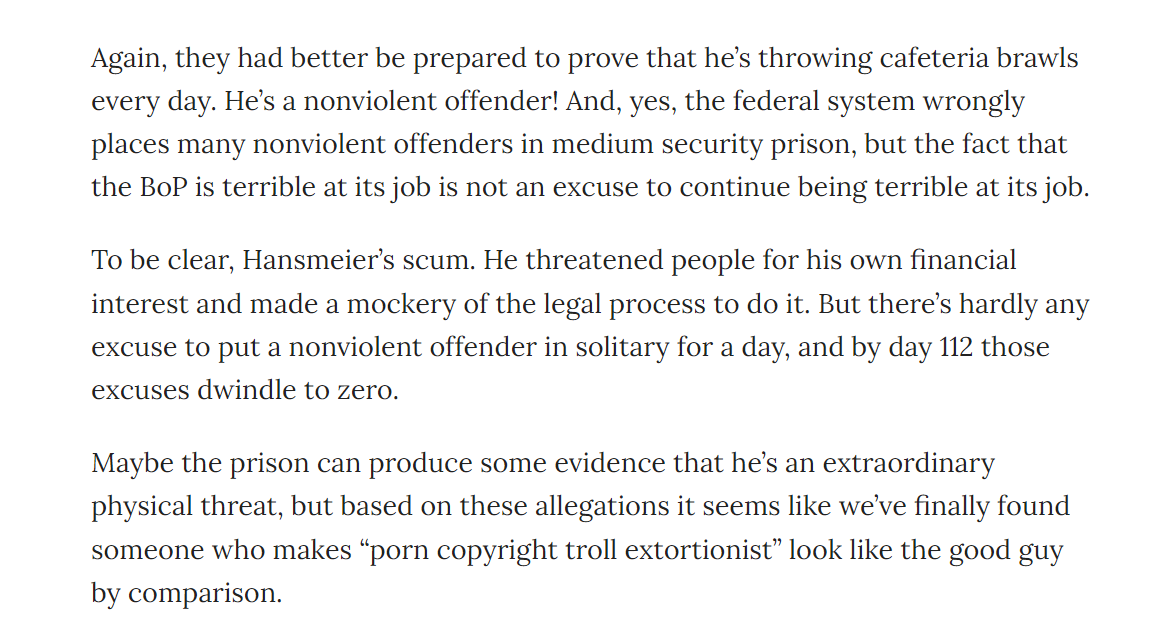 Hansmeier read this report and used Patrice’s article to support his case. In the end, that didn’t help him. United States District Judge Joan N. Ericksen denied the request early this month.

The denial means that the 14-year sentence still stands, but that doesn’t mean Hansmeier is giving up. A few days ago he submitted a new request, asking permission to hire an undercover investigator to enforce his copyrights.

This isn’t the first time that Hansmeier has attempted to continue his anti-piracy work from prison. Similar suits were filed before – and dismissed. Last summer the court prohibited him from filing more.

Despite the filing restriction, Hansmeier now requests a preliminary injunction to prevent the U.S. Government from enforcing the mail-wire fraud conspiracy and money laundering conspiracy statutes for his planned copyright enforcement activities.

This basically means that he wants the court to greenlight a similar enforcement strategy for which he was convicted. That’s the simple way of putting it, without any nuance.

“Paul Hansmeier would like to hire an undercover investigator to enforce his copyrights in creative works and bring claims under the Copyright Act and the Computer Fraud and Abuse Act against people who pirate the works,” the motion reads.

“Hansmeier seeks to do so in a way that addresses the political issues raised by his prior anti-piracy litigation. The primary impediment to Hansmeier protecting his copyrights against Internet piracy is the chilling effect of the government’s criminalization of the routine copyright enforcement methods Hansmeier seeks to use now.” 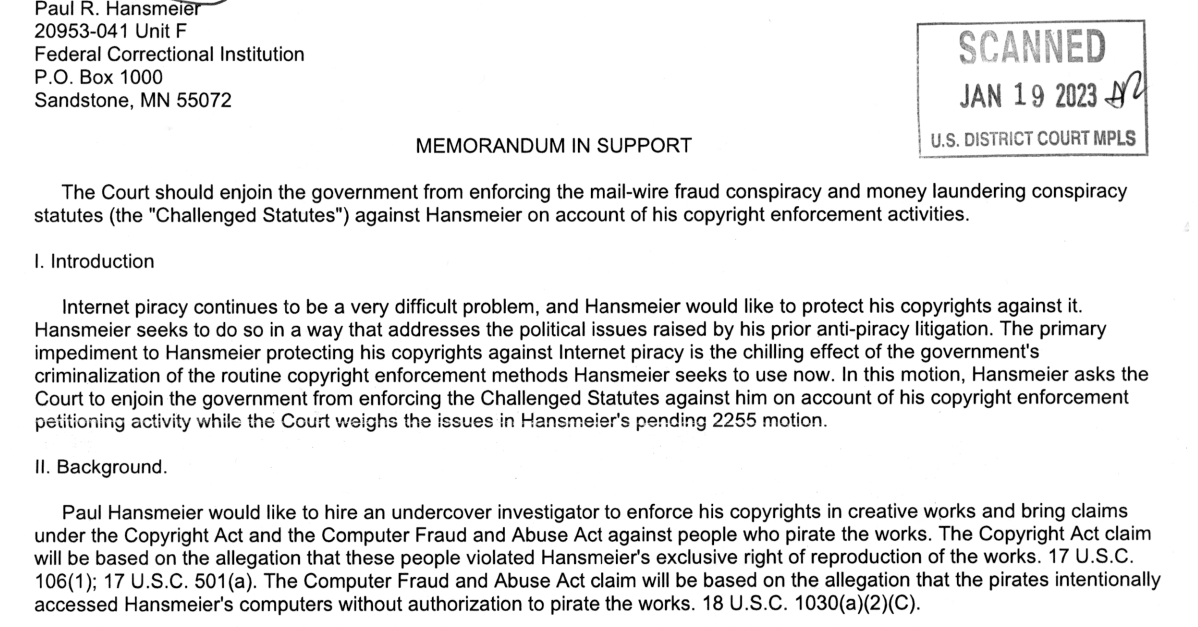 The copyright enforcement campaign could help Hansmeier’s defense, which argues that his conviction was unconstitutional. However, the former lawyer also stresses that pirates deserved to be punished.

Piracy is a Cancer

According to Hansmeier’s motion, piracy is basically theft and a cancer on the creative industries.

“Internet piracy is a cancer eating away at the markets for creative expression. It destroys the incentive to invest in creative output and thus lessens the public’s access to works that enrich the human experience.

“Piracy—which is really just theft—contributes nothing to our society. Efforts to deter piracy benefit our society with no corresponding harm to the public; the only person who loses is the pirate, but pirates can avoid being sued if they don’t steal,” the motion adds.

These arguments didn’t convince District Judge Joan N. Ericksen to rule in Hansmeier’s favor. In a rather brief order, the request was denied, which sends Hansmeier back to the drawing board. 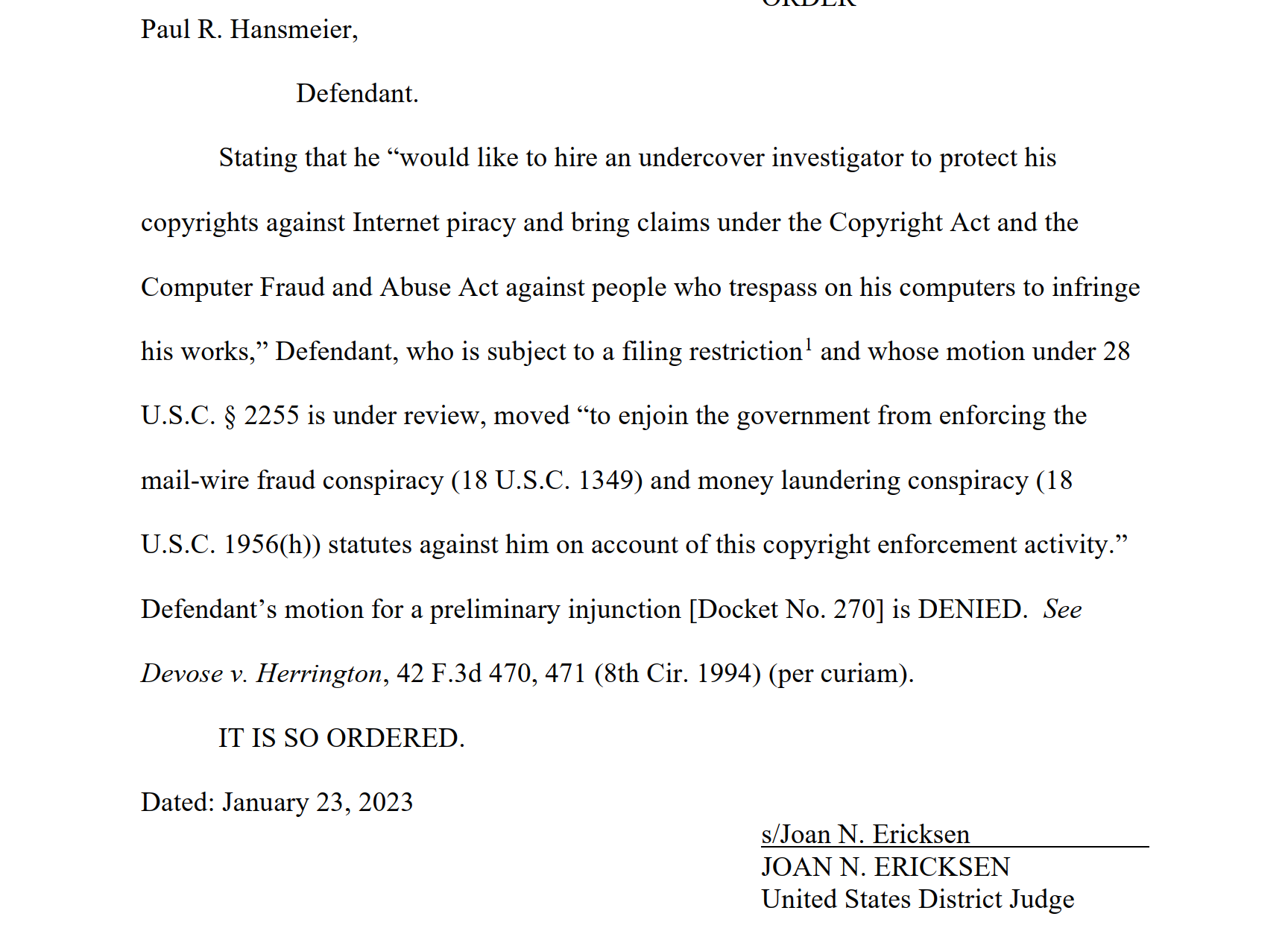 Early this week news broke that major manga publishers Shueisha, Kodansha, Shogakukan and Kadokawa were about to sue Cloudflare in…

Top-tier Spanish football league LaLiga has been waging war against pirate sites and services for the past several years. In…