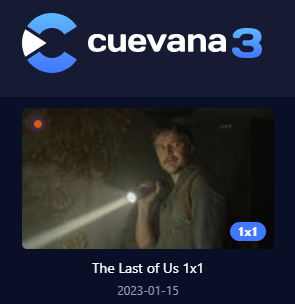 Tomás Escobar is the CEO of Acámica, the Argentina-based tech education company he co-founded a decade ago.

Escobar studied Computer Engineering at the National University of Córdoba and in 2014 appeared in MIT Technology Review’s ‘Innovator Under 35‘ list. Before Acámica, however, Escobar also created a rather successful website; Cuevana.

In 2011, just four years after its launch, Cuevana.tv was among the top 20 most-visited sites in Argentina. When audiences grew in Chile, Peru, Mexico, and beyond, it was clear that trouble lay ahead. In 2012, one of a rumored nine Cuevana administrators was arrested in Chile following a complaint by HBO.

In a 2019 interview, in response to a question asking why he closed Cuevana, Escobar said that the site “grew a lot” in 2013. From there, discussions took place with the industry to see if a business could be developed. When that process encountered difficulties, Escobar decided on a new project – Acámica.

What happened in the background with Cuevana is much less clear, but the bottom line was straightforward. By some mechanism or another, a site that looked like Cuevana carried on regardless.

Not even an appearance on the U.S. Government’s list of most notorious pirate sites in 2015 made that much difference. Cuevana.tv as a domain eventually fell by the wayside, replaced by Cuevana2 and today’s Cuevana3 variants, many of which enjoy tens of millions of visits per month.

In a more recent report to the USTR, the MPA said that in August 2022 alone, a handful of Cuevana-branded domains received 130 million visits. Hollywood had already reported some success after seizing domains a year earlier, but the destruction of the Cuevana movement remained elusive.

Cuevana3.me, which first appeared in 2018, was enjoying ridiculous amounts of traffic last year after the site recovered from the seizure of its .io domain. In August 2022, the .me domain received 66.71 million visits and was ranked the 53rd and 68th most popular site in Argentina and Mexico, respectively.

At some point, Cuevana3.me started utilizing subdomains, possibly to mitigate downranking by Google due to excessive volumes of DMCA notices. Of course, the strategy was spotted by rightsholders; Disney sent notices like this one which tackled Cuevana3.me subdomains and at the same time, those deployed by FMovies for the same reason.

Cuevana3-branded domains were also appearing on national ISP blacklists, including in Peru, courtesy of local government IP body INDECOPI. Then late September 2022, Cuevana3.me was suddenly reported to Google thousands of times over just a few weeks. 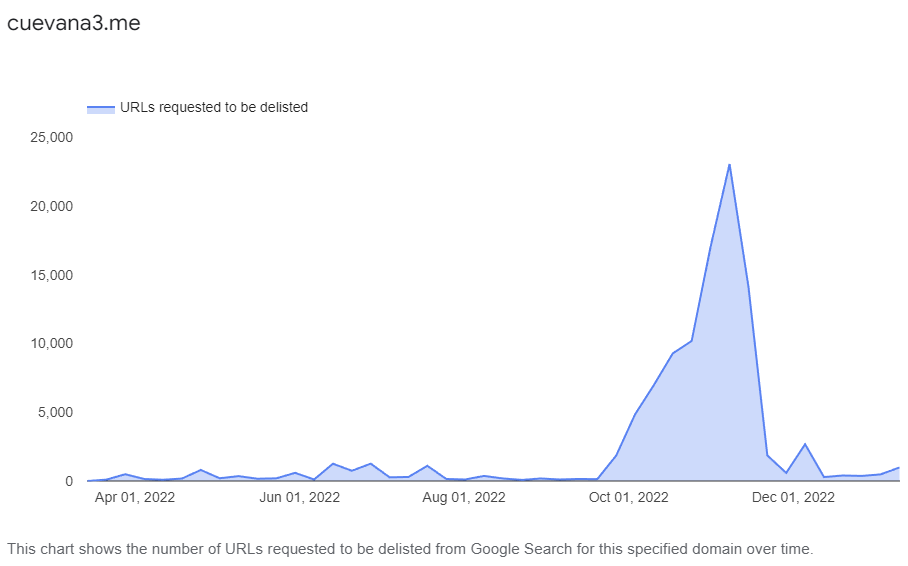 By early December 2022, the peak had passed. Rightsholders no longer seemed interested in Cuevana3.me, but that was for good reason. In what may have been a tactic to avoid being tarred with the .me brush for too long at Google, Cuevana3.me began seamlessly redirecting users to Cuevana3.ai.

Predictably, it didn’t take long for that to get noticed either.

Once again, high volumes of DMCA notices were sent to Google in a short space of time. The names of the most prolific senders won’t come as a surprise since they’re all members of the Alliance for Creativity and Entertainment – Disney, Warner Bros., Amazon, Sony, Apple, NBCUniversal and Paramount. 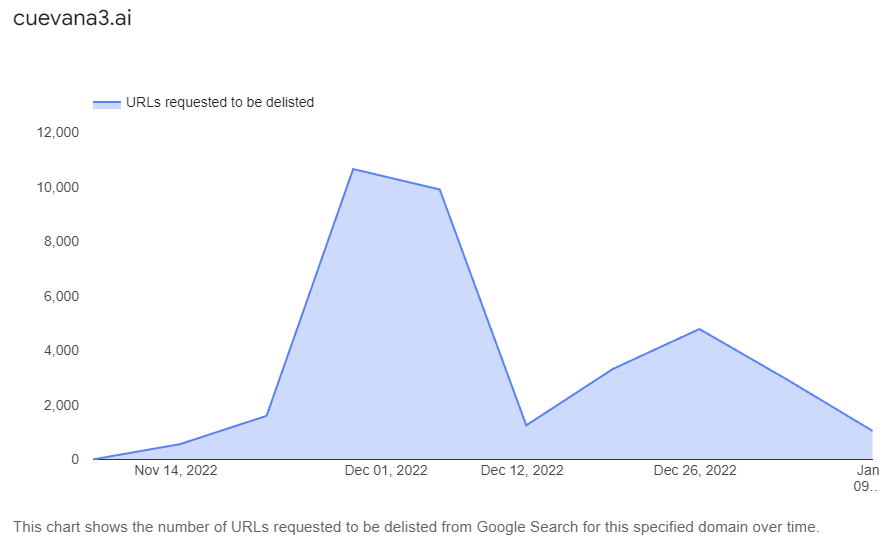 There were also signs that the studios sometimes used Smart Protection, a Spanish anti-piracy company that reportedly uses artificial intelligence to efficiently deal with infringing websites.

If AI really did lose interest in Cuevana3’s .ai domain in early January, that would’ve been quite fitting, albeit for an extremely predictable reason. 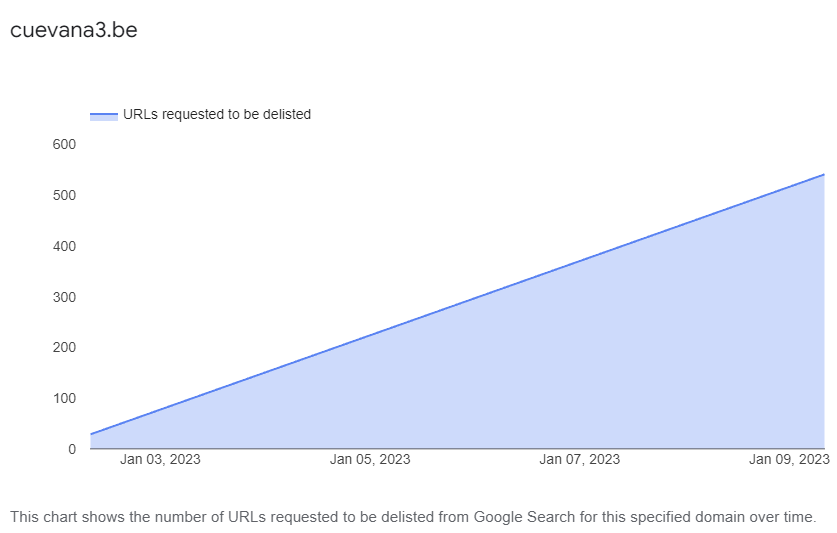 A Twitter account previously associated with Cuevana3’s .io and .me domains announced the move to yet another new domain on January 10, 2023.

“Spread the word, we are the only original Cuevana, the only one that has been at the forefront for years, providing the best content in HD, in your language and totally free. Help us spread the new domain.”

Given that the old domains redirect, finding the new domain won’t be an issue for regular users. It wasn’t a problem for Warner Bros. either. The company sent a DMCA notice to Google targeting the site’s main content page on January 7, three days before the official announcement on Twitter.

Are These Tactics Working?

If we go back to the data cited by the MPA last year, the domain cuevana3.me received 66.71 million visits in August 2022 alone. That’s a big number that the MPA would’ve hoped to reduce with its DMCA notices and from various reports, the knock-on effects of Google downranking.

Since then, the site has adopted (and then booted) cuevana3.ai and is now located at cuevana3.be. That should’ve had at least some effect on the site’s traffic.

According to SimilarWeb data, there is no obvious effect. Cuevana3 appears to have no problem adapting and has lost no traffic as a result. It even appears to have gained some. 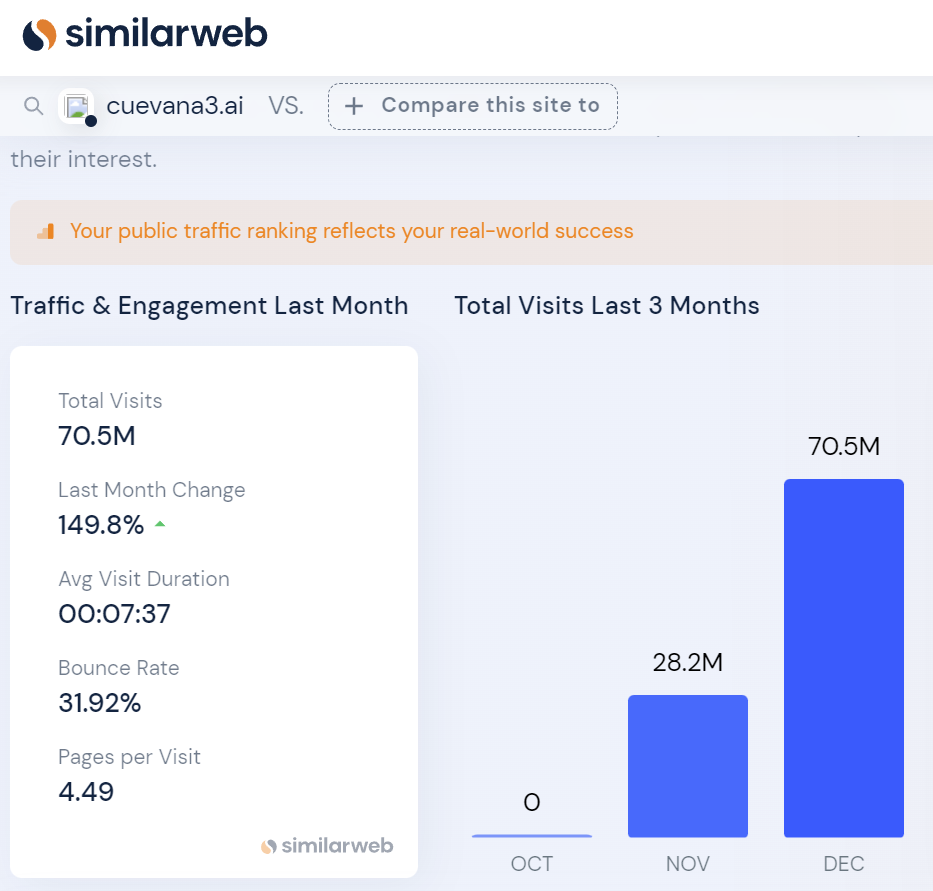 At the time of writing, Warner, Sony, Amazon, Apple, Paramount, Lionsgate, Netflix, MGM and dozens of others are sending DMCA notices targeting the new .be domain.

A total of 194 individual requests have removed 885 URLs in 2023 but that number will dramatically increase in the weeks to come. At what point Cuevana3 will roll out yet another new domain is unclear, but as long as it keeps retaining the old ones, maintaining traffic won’t be a problem.

GitHub is no stranger to copyright complaints. Last year, the developer platform removed nearly 20,000 projects in response to DMCA…

Ever since it’s been technically possible to distribute pirated copies of movies and TV shows online, the Motion Picture Association…