The seizure of dozens of high-end cars and a reported $5.2m from bank accounts made international headlines in November 2019, further boosting Carrasquillo’s profile. A criminal indictment unsealed in 2021 revealed that the popular YouTuber wasn’t the only one under the government spotlight.

Together with Carrasquillo, Jesse Gonzales of California and Michael Barone of New York were charged with serious offenses relating to the illegal capture and redistribution of Comcast, Verizon, Spectrum, DirecTV and Frontier Communications broadcasts. ‘Person 1’ and ‘others’ known to the authorities were described as participants in the scheme but none were listed as defendants.

With access to court records restricted, news of progress in the case had been limited. Then in early 2022, Carrasquillo suddenly announced a key development.

Urging others not to go down the same piracy path, the former IPTV provider said he would plead guilty to criminal copyright infringement, tax fraud, wire fraud, and other offenses.

Around a month later, the government filed a nine-count superseding indictment (pdf). Someone entered a plea on April 1, 2022, but what it contains is still unknown.

Until this week, the same applied to a second plea entered August 16, 2022, but we can now confirm that on that date, Michael Barone pled guilty to Count 1 of the superseding indictment, which includes copyright infringement offenses under 17 U.S. Code § 506(1)(A) and 18 U.S. Code § 2319

Specifics include the willful reproduction of movies and other audiovisual works for commercial advantage and private financial gain, and circumvention of access controls under (17 U.S. Code § 1201(a)(1)A and 17 U.S. Code § 1204(a)(1)). Access device fraud and wire fraud are also included in a list that spans 18 pages.

The government’s motion for forfeiture against Barone states that all property held by him that “constitutes or is derived from proceeds traceable” to the pirate IPTV scheme will be forfeited to the United States. 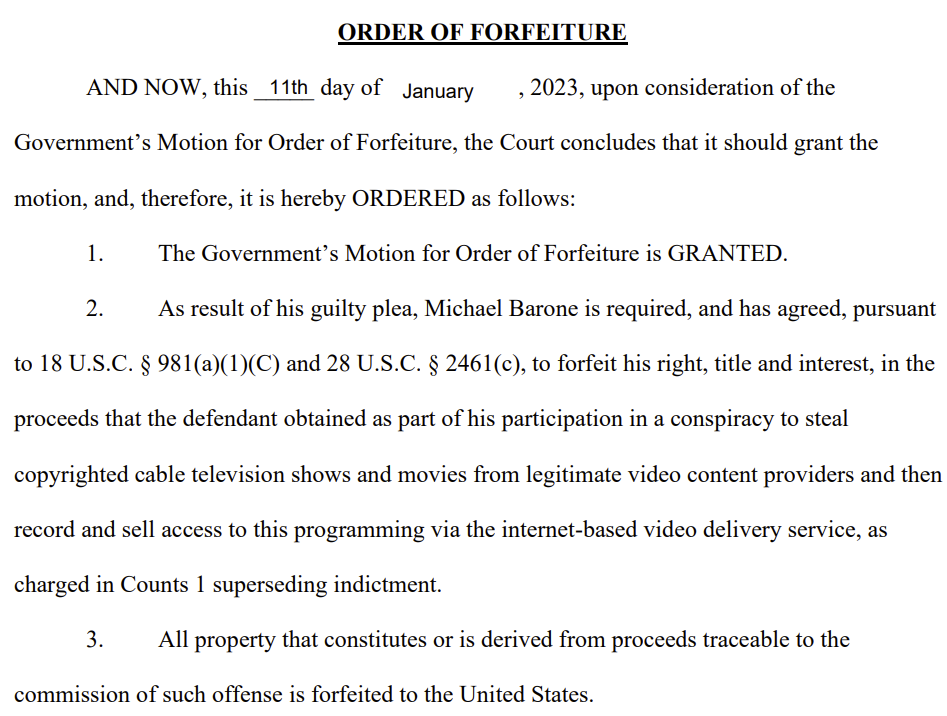 Given that the Gears operation reportedly generated in excess of $30 million, the amount to be forfeited by Barone is relatively low, just $122,402.50 according to court records.

Since the government is unable to locate any further assets, it’s assumed that Barone “dissipated or otherwise spent the proceeds that he obtained. If anything appears in the future, the government can take action, however.

The forfeiture order will take effect once Barone has been sentenced. In August 2022, a sentencing hearing for Barone was scheduled for late November 2022 but that doesn’t appear to have gone ahead.

In September 2022, sentencing hearings for Carrasquillo and Gonzales were scheduled for later this month, so it’s at least possible that all three will attend on the same date.

Documents related to the motion for forfeiture can be found here (1,2, pdf)

For more than seven years, Popcorn Time has been a thorn in the side of movie studios large and small….