Last year, Bungie filed a complaint at a federal court in Seattle, accusing AimJunkies.com of copyright and trademark infringement, among other things.

The same accusations were also made against Phoenix Digital Group, the alleged creators of the ‘Destiny 2’ cheating software.

AimJunkies denied the claims and argued that cheating isn’t against the law. In addition, it refuted the copyright infringement allegations; these lacked substance because some of the referenced copyrights were registered well after the cheats were first made available, AimJunkies said.

In May, U.S. District Court Judge Thomas Zilly largely sided with AimJunkies. The original complaint didn’t provide sufficient evidence for a plausible claim that the ‘Destiny 2 Hacks’ infringed any copyrights, the Judge concluded.

This was bad news for Bungie but the court did offer the company an opportunity to file a new complaint to address these shortcomings, which it did soon after.

In an amended complaint the game developer added more copyright infringement details and more information on the roles of several key people that are also allegedly involved. That includes James May, who Bungie describes as a third-party cheat developer.

AimJunkies responded to the updated complaint and denied that it broke the law. Instead, it turned the table on Bungie, accusing the game developer of hacking when it allegedly accessed May’s computer without permission. In addition, the cheaters argued that Bungie violated the DMCA’s anti-circumvention provision.

Bungie described these claims as false. There is no evidence that it downloaded anything from May’s computer, the company said. And even if it had accessed his computer without permission, AimJunkies failed to argue that any hacking damage exceeded at least $5,000.

Similarly, Bungie also asked the court to dismiss the DMCA circumvention claims as AimJunkies failed to show that the allegedly breached content was copyrighted and that the files were protected by a technological measure.

After weighing the evidence from both sides, U.S. District Court Judge Thomas Zilly sides with Bungie, dismissing the counterclaims.

AimJunkies failed to successfully plead a hacking case as it didn’t provide evidence for any losses suffered. There’s also no proof that Bungie accessed May’s computer without permission.

“May, however, does not explain what this document is or how it evidences instances in which Bungie allegedly accessed his computer without authorization and downloaded his personal information,” Judge Zilly adds. 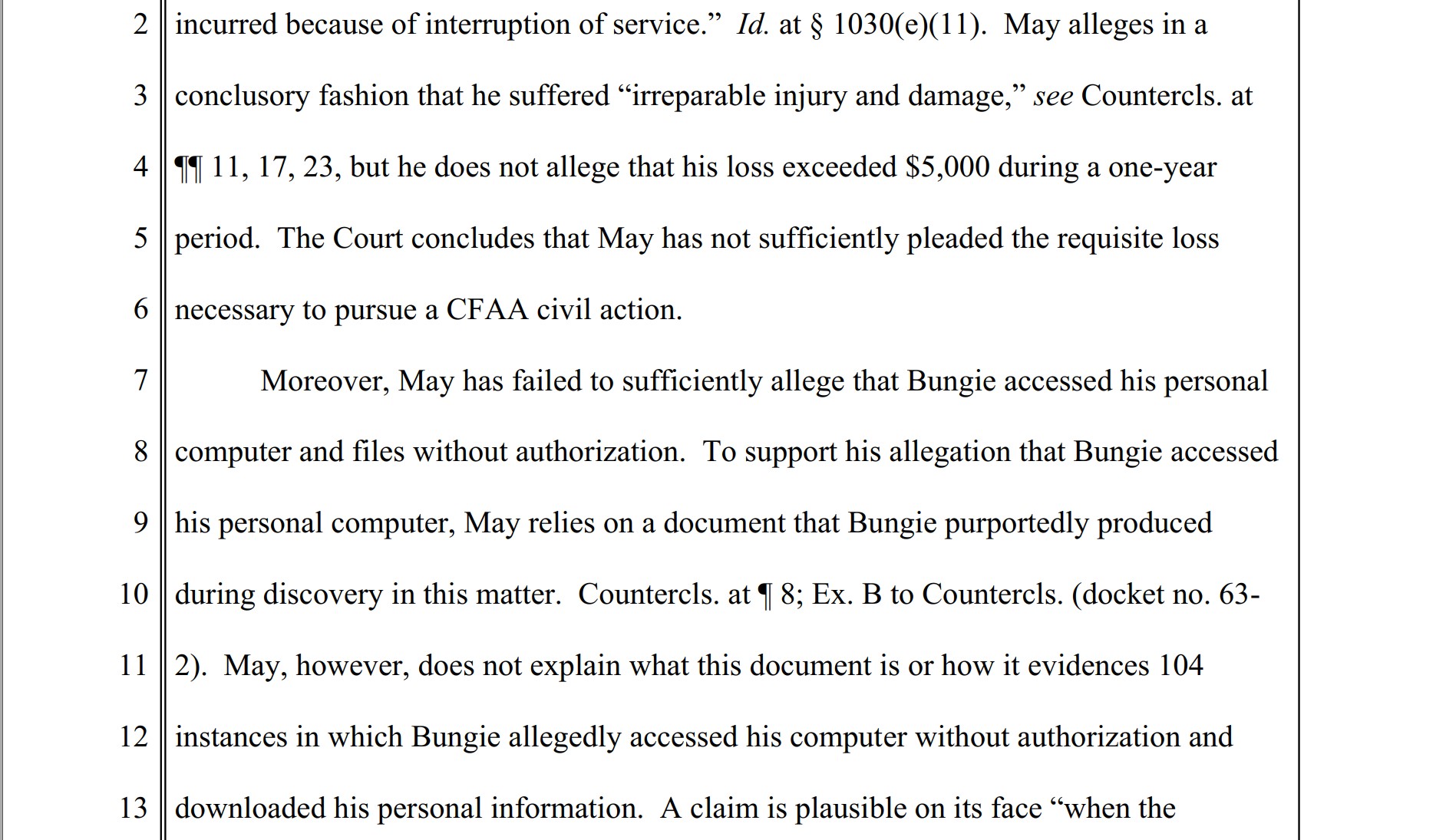 The anti-circumvention claims of May and Phoenix both fail as well. AimJunkies didn’t show that the allegedly accessed files were copyrighted or protected by technological measures, as is required.

“Importantly, neither May nor Phoenix Digital allege that Bungie accessed any copyrighted work,” Judge Zilly notes. “Further, Phoenix Digital has not pleaded any facts to support that its ‘loader software’ was protected by a technological measure.”

The dismissal is a major setback for AimJunkies but the matter is not completely over just yet. Judge Zilly agrees with Bungie that there is sufficient ground to dismiss the counterclaims with prejudice, meaning that AimJunkies won’t have a chance to repair the shortcomings.

The pleading for amended deadlines expires later this month, so AimJunkies has an opportunity to amend its counterclaims and take another shot at Bungie.

As part of its endless quest to disrupt the unauthorized distribution of copyrighted content, in March 2021 Dutch anti-piracy group…

The entertainment industry’s battle against pirate sites is frequently described as a cat-and-mouse game. The site operators are often anonymous…