In recent years, legal video streaming services such as Netflix, HBO and Amazon have flourished.

At the same time, millions of people are streaming from unauthorized sources as well, often paired with perfectly legal streaming platforms and devices.

This mix of legal devices and illegal add-ons is a challenge for law enforcement. Platforms such as Kodi, Plex, and Roku are perfectly legal but can be configured to access pirated content as well.

A few years ago, Kodi found itself at the center of this add-on controversy. The software’s creators always distanced themselves from illegal activity but third-party sellers beyond their control marketed “fully loaded” Kodi boxes as ideal tools for piracy.

This eventually culminated in several lawsuits where sellers of pre-configured boxes were found liable for copyright infringement. The legal campaign was backed by many Hollywood studios as well as Netflix. They argued that illegal streaming boxes hurt their revenues but new research suggests that this may not always be the case.

The pirate streaming box controversy inspired researchers from the University of Delaware and the University of North Carolina at Chapel Hill to find out how these devices actually change people’s consumption and spending habits.

“The lawsuits brought by content providers and MSOs suggest that Kodi-ready streaming boxes facilitated piracy and meaningfully impacted the profitability of content production and distribution. Yet, as has been the case with many past claims of damages due to piracy, there was no direct empirical evidence to demonstrate economic harm,” they write.

To obtain empirical evidence, the researchers tapped into panel data from 10,337 households, which captures a wide range of spending and consumption habits. These data include Internet and TV usage reports as well as billing records for a sixteen-month period spanning 2017-2018, when Kodi-powered streaming boxes were widely used.

The data allowed the researchers to compare habits before and after purchasing a Kodi-powered box. This isn’t a perfect proxy for piracy, as the devices can be used for legitimate purposes as well. However, the article points out that earlier research showed that two-thirds of box owners have pirate add-ons installed.

When simply comparing households that have a Kodi box to those that don’t, it becomes clear that there are vast differences between the two groups. The box owners generate much more internet traffic on average, and they spend more time streaming through Netflix, Amazon, YouTube, Twitch, and other platforms. 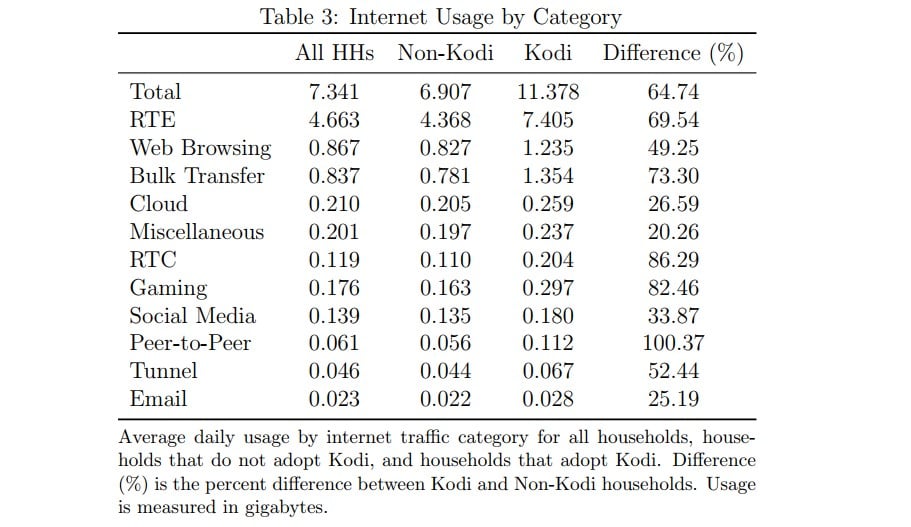 This finding isn’t particularly surprising or insightful. What happens to households after they first purchase a Kodi box is what the researchers really want to determine. Here, the data paint a compelling picture.

After adopting Kodi, total Internet usage in households increases by 2.88 gigabytes per day. A large part of this traffic is driven by Netflix (0.52 gigabytes) and YouTube (0.57 gigabytes). No significant increases were observed for Amazon Video and Hulu.

As expected, there is also a significant rise in traffic categories that are typically associated with piracy.

Interestingly, traffic to traditional network channel streaming content also increases. According to the researchers, this suggests that households may use the box to substitute viewership that would otherwise take place through a regular TV connection.

Kodi adopters also change their spending habits after buying a box. They sped less money on TV subscriptions and more on their Internet bills as they upgrade to higher tiers. This is in line with what one would expect from cord-cutters.

Overall this suggests that the total monthly bill of Kodi adopters decreases by 1%. This means that there is less revenue going to third parties. However, the researchers caution that this may not translate to lower profits overall, as TV margins tend to be lower than Internet margins.

All-in-all, the study shows that piracy can have both positive and negative effects on the broader economy. And this form of streaming box ‘piracy’ may even help major rightsholders, including Netflix.

“Many large SVOD services including Netflix appear to have benefited from Kodi adoption in spite of their support of lawsuits alleging damages,” the researchers write, adding that Internet companies also observe an increase in revenue and profits.

On the other hand, many broadband companies also generate profit from selling TV subscriptions. So, whether they make more or less profit overall depends on the margins they have for each business. Or as the researchers put it:

The study provides valuable insights into the streaming piracy problem. While lawsuits and other legal actions have pretty much put an end to Kodi’s piracy add-on problem, this research will help to put future piracy waves in perspective.

A copy of the paper “The Impact of Video Piracy on Content Producers and Distributors” by Zachary Nolan, Jonathan Williams and Haoran Zhang is available here (pdf). This is a working paper that hasn’t yet been peer-reviewed

One of the core pillars of academic research is sharing. By letting other researchers know what you do, ideas are…

Late 2011, Megaupload founder Kim Dotcom published a promo video that surprised even the most hardened file-sharers. Produced by Printz…

Dune (also known as Dune: Part One) is the first installment of a planned two-part adaption of the 1965 sci-fi…