Over the years, copyright holders have tried a multitude of measures to curb online piracy, with varying levels of success.

Site blocking has emerged as one of the preferred solutions. While blocking measures are not bulletproof, the general idea is that they pose a large enough hurdle for casual pirates to choose legal options instead.

The blocking approach was very controversial at the start of the last decade but it’s increasingly being normalized. Dozens of countries have legal or procedural options to request blockades today. The Motion Picture Association (MPA) has been the driving force behind many of these blockades and, in a recent webinar, the group revealed the global scale of this endeavor.

The online panel, hosted by the Washington Legal Foundation, featured MPA’s Senior Executive Vice President Karyn Temple, who discusses the many successes of recent years. This includes the formation of the Alliance for Creativity and Entertainment (ACE), which leads anti-piracy efforts around the world.

In just a few years, ACE has established itself as the dominant anti-piracy force, facilitating seizures, arrests, and convictions across various continents. While going after the operators of pirate sites and services tends to be the preferred option, these people are not always easy to locate. When that’s the case, site blocking comes into play.

Site-blocking measures are often targeted at ISPs in the form of “no-fault” injunctions. These allow rightsholders to demand blockades from Internet providers, without holding the companies directly liable. In addition, some countries have adopted dedicated site-blocking schemes, which approve blocking measures through an administrative process without direct oversight of a court.

The scope of these blocking campaigns continues to expand. Three years ago we reported that 4,000 websites had been blocked in 31 countries. A few days ago, the MPA revealed that there are now 20,000 websites being blocked in 39 countries, an effort that encompasses over 75,000 domain names. 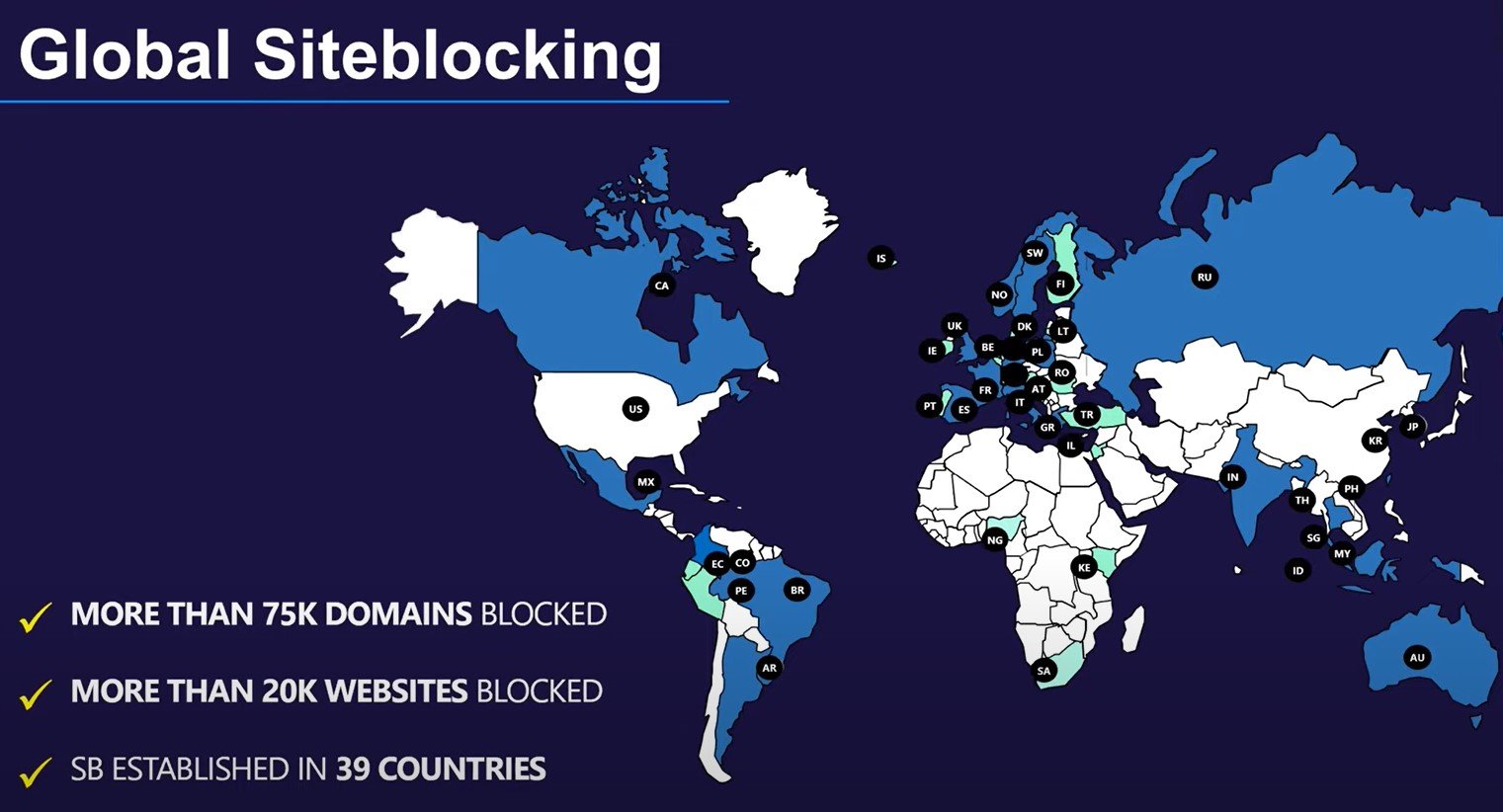 The MPA is pleased with these achievements on the blocking front, but one country is noticeably absent from this global effort; the United States. According to Temple, site blocking is more complicated in the US as the law doesn’t explicitly provide the option for “no-fault” injunctions.

“We don’t utilize it in the United States because there’s not currently a specific provision in the US copyright law that allows us to do so. So it hasn’t been something that people have regularly done in the United States, but we have a very effective enforcement program overseas where there are a number of countries that have site-blocking regimes,” Temple said.

This “no-fault” injunction problem has been mentioned in the past. Technically, US courts can order intermediaries to block sites, and that has indeed happened. However, the text of the law is not entirely clear on whether ISPs have to be held liable or not.

Ideally, the MPA and other rightsholders would like to change the legal framework in the United States to allow for these orders on home turf. Concrete proposals are yet to be formed but it’s been a decade since the last attempt and there are increasing calls to give it another try.

The previous “SOPA” site-blocking legislation became stranded after massive public protests were supported by tech giants including Google and Wikipedia. The main fear was that blocking would eventually lead to over-blocking and other problems affecting core internet infrastructure.

Ten years on, Temple notes that global site-blocking efforts have shown that these concerns were unfounded.

“What we found is that some of the issues that have been raised in the past in the United States when we’ve been considering legislation on this, have really proven to be red herrings,” Temple said. “There haven’t been significant issues of overblocking or censorship and the Internet still is in existence.”

The internet is indeed still intact but there have been instances of over-blocking, such as in Austria recently where ISPs had to knowingly block innocent sites to comply with an order. While these are ‘incidents,’ they can have a broad impact.

That said, the tide seems to have slowly turned in favor of rightsholders. Ten years ago Google was one of the leading opponents of site blocking, characterizing it as censorship. Today, the search engine voluntarily complies with site blocking orders, even if it’s not listed as a defendant itself.

This change hasn’t gone unnoticed at the MPA, as Temple highlighted during the panel discussion.

“Ten years ago I don’t think that this would be an outcome that anyone would’ve imagined – that we would be able to use site blocking so effectively overseas and that we’re actually able to increase the effectiveness of site blocking by having a voluntary initiative with Google, that delists those websites from the search engine.”

These voluntary cooperations are key to solving the piracy problem, Temple believes. The MPA now has a lawyer dedicated to getting more of these cooperations in place; cooperations with companies that it considered lawsuit candidates in the past.

All-in-all, we get the impression that the MPA is pleased with the progress achieved over the past decade, including the 20,000 blocked sites. The ultimate victory, however, will come when site-blocking becomes commonplace in the US.

Few people need to be reminded of the massive success story attached to HBO’s hit TV series, Game of Thrones….

Over the years we’ve published thousands of articles on copyright law, from how it works in theory to its application…

When torrent sites were gaining significant traction in the mid 2000s, discovering information about their infrastructure and even their operators…