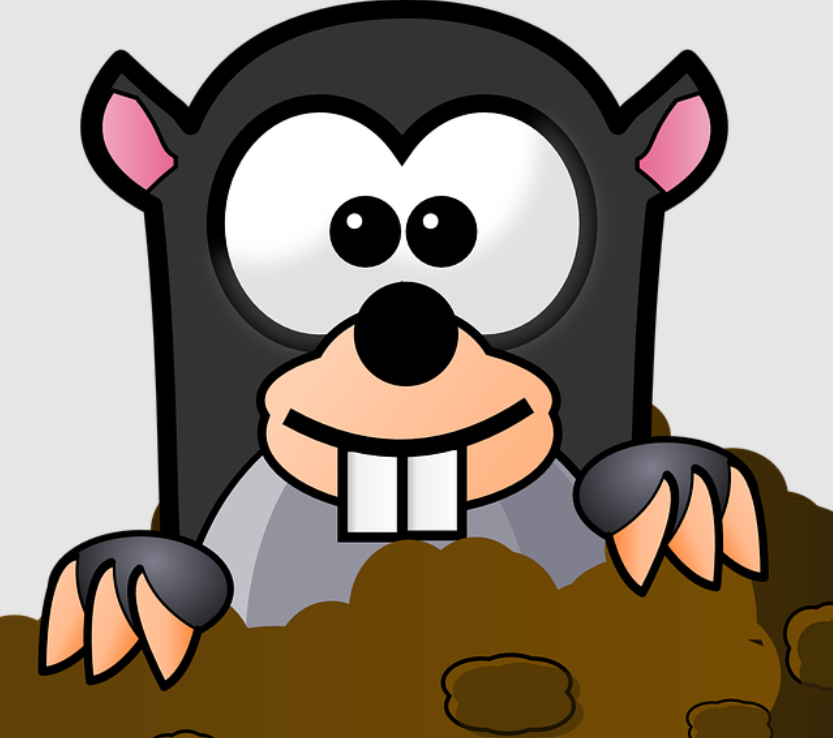 UK broadcaster Sky has never been particularly fond of people pirating its content.

It’s a battle that’s raged for more than 30 years, and despite there being no apparent end in sight, Sky keeps slugging it out, putting in the rounds, and hoping for a win on points.

From its roots as Sky Television through its teenage years as BSkyB, Sky has battled everything from box and smartcard hacking through to smartcard blocking and smartcard emulation. Not even cardsharing dented Sky’s enthusiasm for a piracy brawl.

Sky’s latest arch-nemesis is the commercial IPTV provider. Utilizing captured satellite and cable streams or even its own streaming service NowTV, today’s Sky faces the most organized pirates the company has ever seen, and in greater numbers too. But as that war rages in the background, Sky is careful to ensure that other aspects of internet-based piracy are taken care of too..

Over the past decade, Android-based piracy apps have given Sky a migraine along with the rest of the entertainment industries. Popcorn Time, Showbox, Mobdro and Terrarium TV all played their part – at least before every last one succumbed to legal pressure.

The problem for Sky is that it’s easier than ever for today’s competent programmers to come up with an alternative. Despite anti-piracy groups claiming to have taken hundreds down, new apps or resurrections of old ones are never in short supply.

Indeed, despite several attempts by Sky to wipe out the same few apps, they always have a tendency to bounce back in one way or another.

Sky, MPA and ACE vs. TeaTV: Seconds Out, Round 6

Back in 2020, the Motion Picture Association decided to disrupt popular streaming app TeaTV. The app had featured in a widely-read article published by CNBC before disappearing offline, but a grand return was always on the cards.

The MPA tried to have TeaTV’s operator permanently banned from Github and since the MPA is behind anti-piracy group ACE (and Sky is a member of that coalition), the broadcaster would’ve given its full support. But despite four sets of correspondence with Github, the ultimate goal of killing the app remained elusive.

TeaTV turned out to be a pretty strong brew, despite the suspension of its Twitter account. Through strong branding it has managed to stay in the game, but whether today’s variant (of which there are several) is/are the same and/or operated by the original developer is a question for people with an abundance of spare time.

The key thing is that still exists and Sky still isn’t giving up. In a fresh move against TeaTV, an anti-piracy company representing Sky Group’s Sky Italia follows the familiar pattern of demanding the app’s removal from Github.

“We are writing in the name and on behalf of Sky Italia Srl, the exclusive owner of distribution and exploitation rights of the Sky IT channels. This IPTV App (TeaTV) includes illegal and unauthorized Pay Tv Sky IT tv series: Gomorra,” Kopjra S.R.L. writes.

In an effort to help Github understand the problem, Kopjra provides a tutorial detailing where to find the app, how to download and install it, and ultimately how to carry out a search to find the infringing content before watching it. 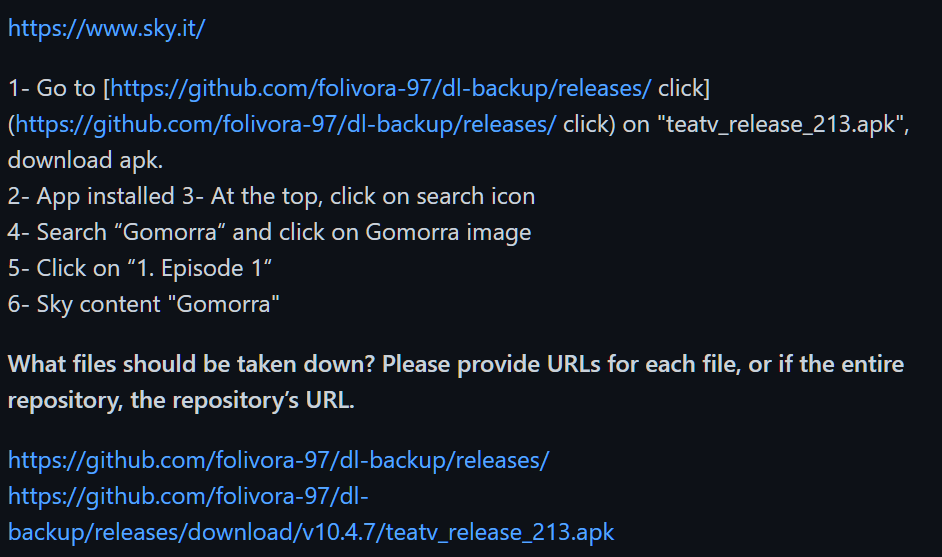 Whether Github took them up on the offer isn’t clear but Sky’s DMCA takedown notification was a success. The locations referenced in the takedown notice were either deleted or suspended by Github in response.

Sky vs. CucoTV: The Rematch

If TeaTV is an irritant to Sky, movie and TV show streaming app CucoTV certainly won’t be viewed any more positively. Anti-piracy group Kopjra S.R.L. asked Github to take down a TeaTV website and repository in May 2021, but even that required an additional complaint weeks later to hopefully finish off the task.

Somewhat predictably, ten months after that the job still wasn’t done, so yet another complaint was fired off to Github. Featuring a customary piracy tutorial, it prompted Github to respond with the necessary action.

Five months later, after a user called CucoTV switched to CucoTV2 and then to CucoappTV, a CucoTV-branded app appeared once again on Github. This time it was Sky UK’s turn to spoil the piracy party with another tutorial and yet another demand for the persistent piracy app to be taken down.

To the surprise of absolutely nobody, a user called ‘cucotv2022’ recently signed up to Github and proceeded to upload a CucoTV-branded streaming app to a similarly named repository.

Whoever it was also created a new website to promote the free software but the fun was short-lived. Another DMCA complaint filed on behalf of Sky UK successfully requested the elimination of both.

CucoTV doesn’t appear to have much of an offical presence on Github right now but its Twitter account suggests that Discord may have become the latest hot location. In the meantime, Sky maintains its search engine delisting campaign against dozens of sites claiming to offer CucoTV for download.

Whether Sky will follow up on Discord remains to be seen but the company remains vigilant as it identifies new threats on the back of existing ones.

Two days after the latest successful CucoTV takedown, a follow-up DMCA notice from Sky took down what appears to be the official repo of popular free streaming app CinemaHD, an app that also has links to similar services. In common with CinemaHD, they also have clones and copycats muddying the waters.

Saying that the piracy app ‘marketplace’ has become more complicated over the years is a bit of an understatement. If users put in enough effort and have enough patience, it’s possible to track specific apps over time. But factor in the disruption caused by takedowns, which sometimes results in developers ‘going dark’ and coming back with a similar app under a new name, not much is straightforward for long.

Opportunists deliberately sowing confusion to draw attention to their own tools is also a problem, especially for people who click on the first thing they find. Sky takedown notices sent to Google reveal dozens of sites claiming to offer CucoTV, albeit in a range of suspiciously broad filesizes.

Sky undoubtedly faces additional headaches due to this chaos, but if it’s any consolation at all, it’s not alone when it reaches for the painkillers.

As far back as 2012, Adobe was planning for the eventual demise of its iconic Flash Player. Gradually superceded by…

In the wake of Russia’s invasion of Ukraine, French satellite broadcaster Eutelsat refused to stop Russia from using its satellites….