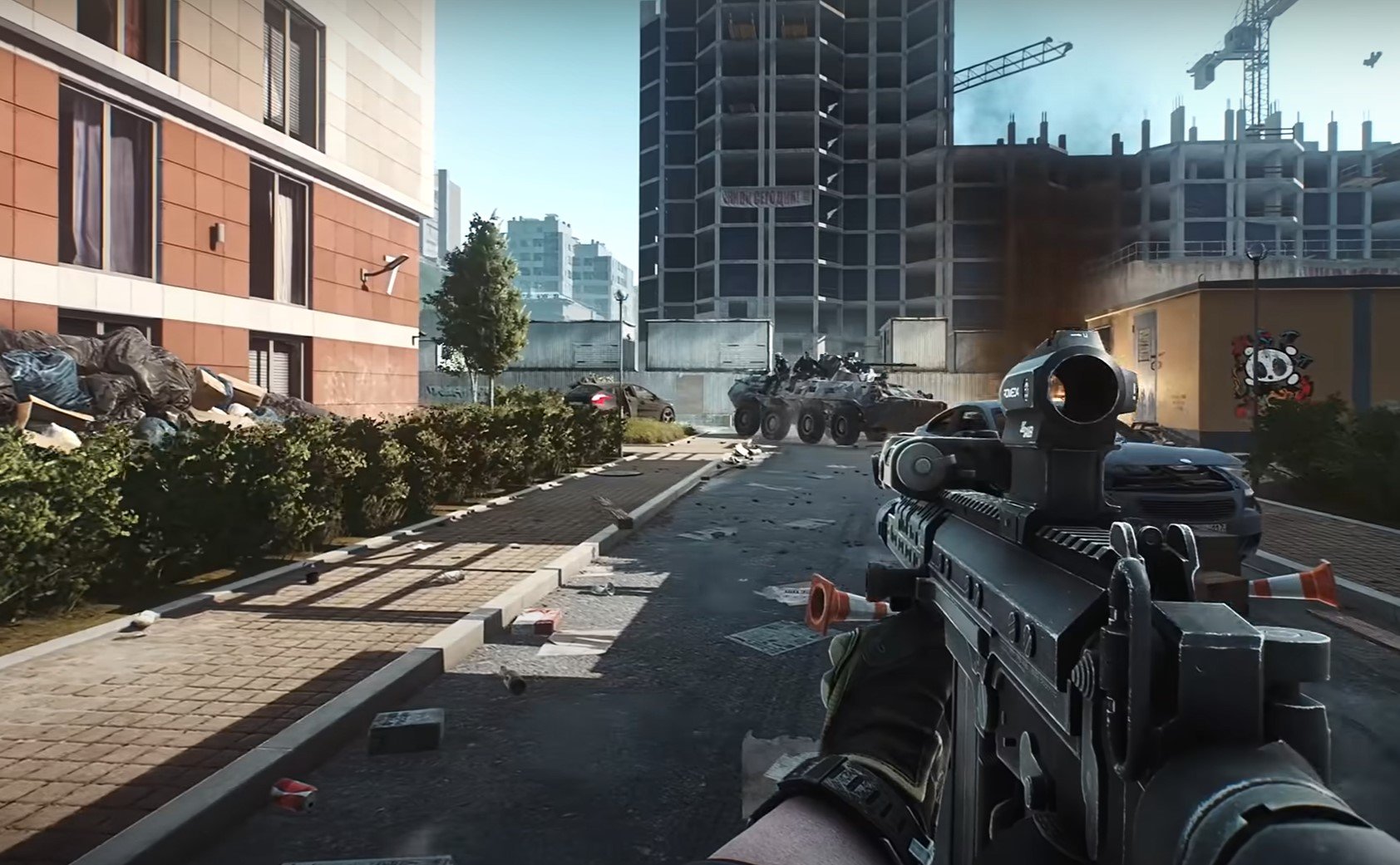 Russia’s invasion of Ukraine has resulted in thousands of tragic deaths while millions of people have been forced to flee their homes.

While soldiers risk their lives on the battlefield, an information war is raging around the world. More than in any previous armed conflict, the Internet has presented itself as a powerful weapon.

Propaganda has always been an integral part of warfare, on all sides. Technology has certainly made it easier to spread but, at the same time, there are plenty of ways to counter online messages as well.

Over the past several months, many Western platforms have banned content deemed to be Russian propaganda. In turn, Russia decided to block Instagram, Twitter, Facebook and others to block Western information as a defensive move.

In early March, the European Union was one of the first authorities to take action in this realm. As part of a sanction package, online service providers were directed to block access to the news outlets Sputnik and Russia Today (RT).

Until then, these services were readily available across Europe, both online and as TV channels, but that abruptly changed. ISPs were instructed to block the news sources effective immediately and until Russia retreats.

“Sputnik and Russia Today are under the permanent direct or indirect control of the authorities of the Russian Federation and are essential and instrumental in bringing forward and supporting the military aggression against Ukraine, and for the destabilisation of its neighbouring countries,” the EU announced.

These sanctions didn’t stop at services that provided direct access to information. On March 4th, the European Commission sent a letter to Google, clarifying that the broad order also applies to search engine results.

“[B]y virtue of the Regulation, providers of Internet search services must make sure that i) any link to the Internet sites of RT and Sputnik and ii) any content of RT and Sputnik, including short textual descriptions, visual elements and links to the corresponding websites do not appear in the search results delivered to users located in the EU.”

Google swiftly complied with these requests, and when the Commission followed up with other domains through which RT and Sputnik were made available, it did the same. However, a separate notice sent late July started to raise some eyebrows.

EU Takedown of ‘Escape from Tarkov’?

This takedown notice also listed the European Commission as the sender, but this time came packaged as a DMCA takedown notice targeting a video game. Specifically, Google was asked to remove the official domains for the game “Escape from Tarkov” and its makers Battlestate Games.

The language in the notice is clearly identical to the earlier takedown demands, although quite a bit is left out. The game and its makers stand accused of gravely distorting and manipulating facts and causing all sorts of political and societal unrest. 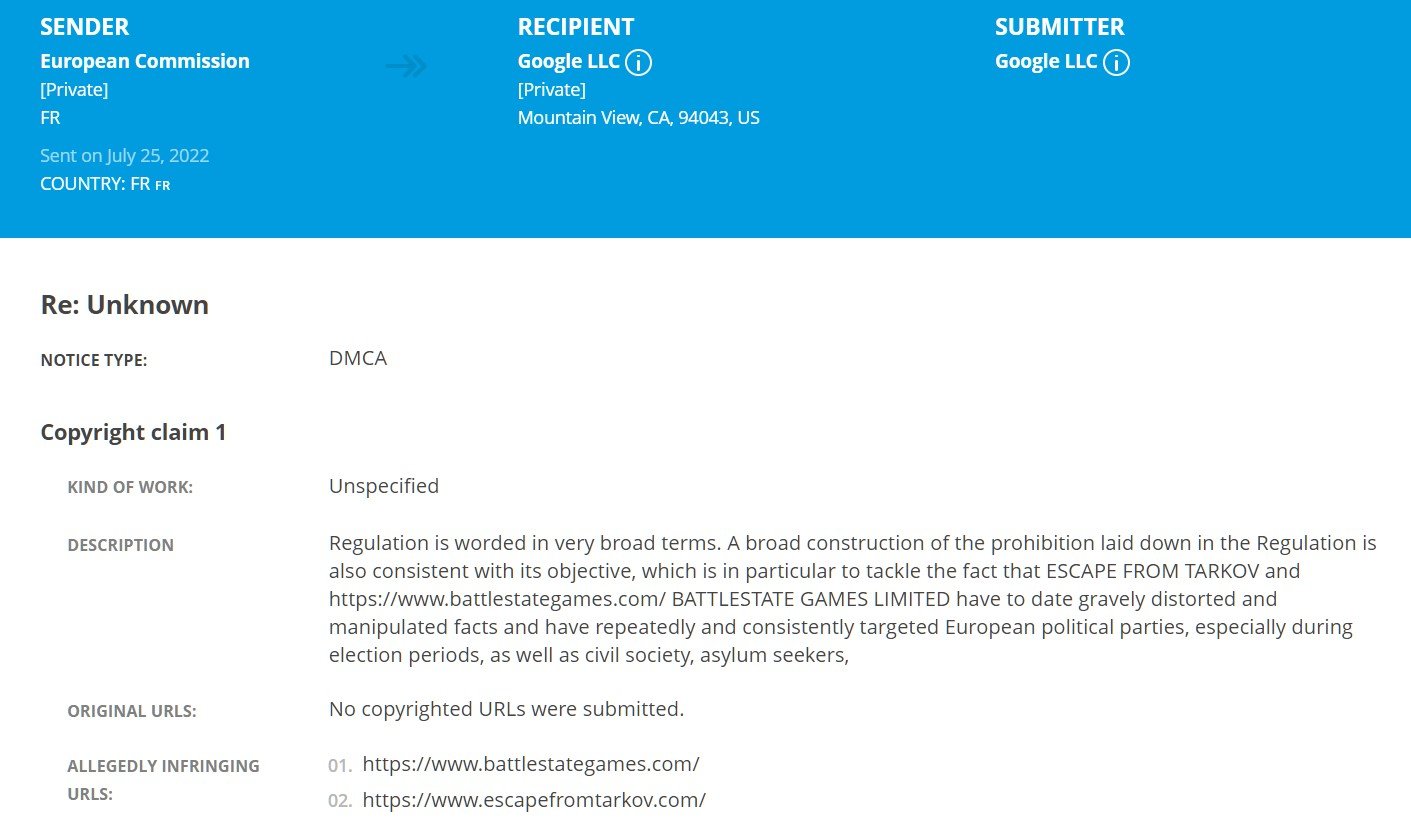 So what is going on here? Battlestate Games is a Russian operation but aside from that, there are no obvious links to RT and Sputnik that we’re aware of. Perhaps we missed something?

Despite the alarming claims in the notice, Google didn’t take action. And that’s probably for a good reason. When we reached out to the European Commission a spokesperson informed us that the DMCA notice doesn’t appear to be anything official.

“We have no trace of such request being sent from the relevant services of the European Commission,” a Commission official said.

This doesn’t come as a surprise as plenty of red flags are already on display. For one, all legitimate notices from the Commission are marked as “government requests” in the Lumen Database, while this one is listed as a simple “DMCA notice” intended for copyright takedowns. The imposter also sent the notice from France, while the Commission sent theirs from Belgium.

Finally, we spotted a different French DMCA takedown request that was sent on the same day, where an entity describing itself as ‘Battlestate Games’ attempted to wipe its ‘own’ domain name from Google’s search results.

That’s likely the work of the same ‘imposter,’ who wrote the following:

“We are bunch of Russian hackers that support war on ukranie and our bloyed leader VLADIMIR PUTIN is told us to make a game that makes Russian propaganda on USA people and whole world so we can kill every victims easly who is not russian on Ukranie. Please as BATTLESTATE GAMES LIMITED we want this URL to be removed asap.”

In this instance, Google spotted the imposter and took no action. However, it’s easy to see how these false reports have the potential to slip through, especially when they target less prominent targets. Just as with propaganda, something will eventually stick no matter how crazy it sounds.

When it is released this Friday in the United States, the much anticipated Spider-Man: No Way Home is almost guaranteed…

While anime is still insanely popular in its home country of Japan, over recent years the popular animation format has…

‘App Stores Should Screen Developers and Apps to Prevent Piracy’

Over the past decade, mobile applications have become the standard platform for most people to consume content online. Whether it’s…