When online file-sharing hit the mainstream, entertainment company bosses tore out their hair in frustration.

They knew their products, ran tight businesses, and had the best possible grasp on the intricacies of their respective markets. Competing with ‘free’ was clearly impossible.

Today we know that by looking beyond the bare content, such as a music track or a movie, added value can be found in how content is presented, delivered, consumed, and ultimately appreciated by the customer. Legal content on its own may have problems competing with free, but as part of a premium content consumption experience, it’s not an absolute requirement.

When Netflix was ‘just’ a delivery platform, its pragmatic approach to the piracy problem was well known. But as Mike Tyson famously said, everyone has a plan until they get punched in the mouth. As Netflix burned through huge sums making its own content, its ‘exclusives’ rose up the piracy charts as quickly as Hollywood’s. People don’t pirate platforms, but they love pirating content.

Netflix decided to join the MPA and by extension anti-piracy coalition ACE, adopting anti-piracy attitudes more or less aligned with those of the major studios. But Netflix has a legacy problem to solve, one that precariously spans paying customers and freeloaders, with implications for growth.

‘Password Sharing’ was once a strategically ignored activity that helped to foster good customer relations while introducing friends and families to legal streaming. After being subjected to a cynical rebranding campaign by its detractors, password sharing is now all but dead, replaced by its boogeyman brother – Password Piracy.

Netflix doesn’t use the term publicly but there is no doubt that the company wants to eliminate the phenomenon from its platform. How that can be achieved without damaging customer relations is a billion-dollar question. Adobe thinks it has the answer.

Adobe prefers the term ‘credential sharing’ to ‘password piracy’ but doesn’t downplay its implications. Citing a 2020 study, Adobe says that up to 46 million people in the U.S. could be accessing streaming services with credentials that aren’t theirs while paying nothing for the privilege.

Citing potential losses of $9bn per year – three times those of rival Disney+ – Adobe says Netflix suffers most from credential sharing. The company believes that if streaming video is to avoid the fate of streaming music where free content is expected, action is needed sooner rather than later. But it needs to be executed with care.

Efforts to reduce password sharing can include repeatedly requesting login information, strictly enforcing device limits (including deactivations/reactivations), aggressively enforcing concurrent connection limits, and multi-factor authentication. While these mechanisms are meant to deter password sharing, they irritate everyone – even the person who pays the bill.

Adobe believes that since every user is different, any actions taken against an account should form part of a data-driven strategy designed to “measure, manage and monetize” password sharing. The company’s vision is for platforms like Netflix to deploy machine learning models to extract behavioral patterns associated with an account, to determine how the account is being used.

These insights can determine which measures should be taken against an account, and how success or otherwise can be determined by monitoring an account in the following weeks or months.

Ignoring the obviously creepy factors for a moment, Adobe’s approach does seem more sophisticated, even if the accompanying slide gives off a file-sharing-style ‘graduated response’ vibe. 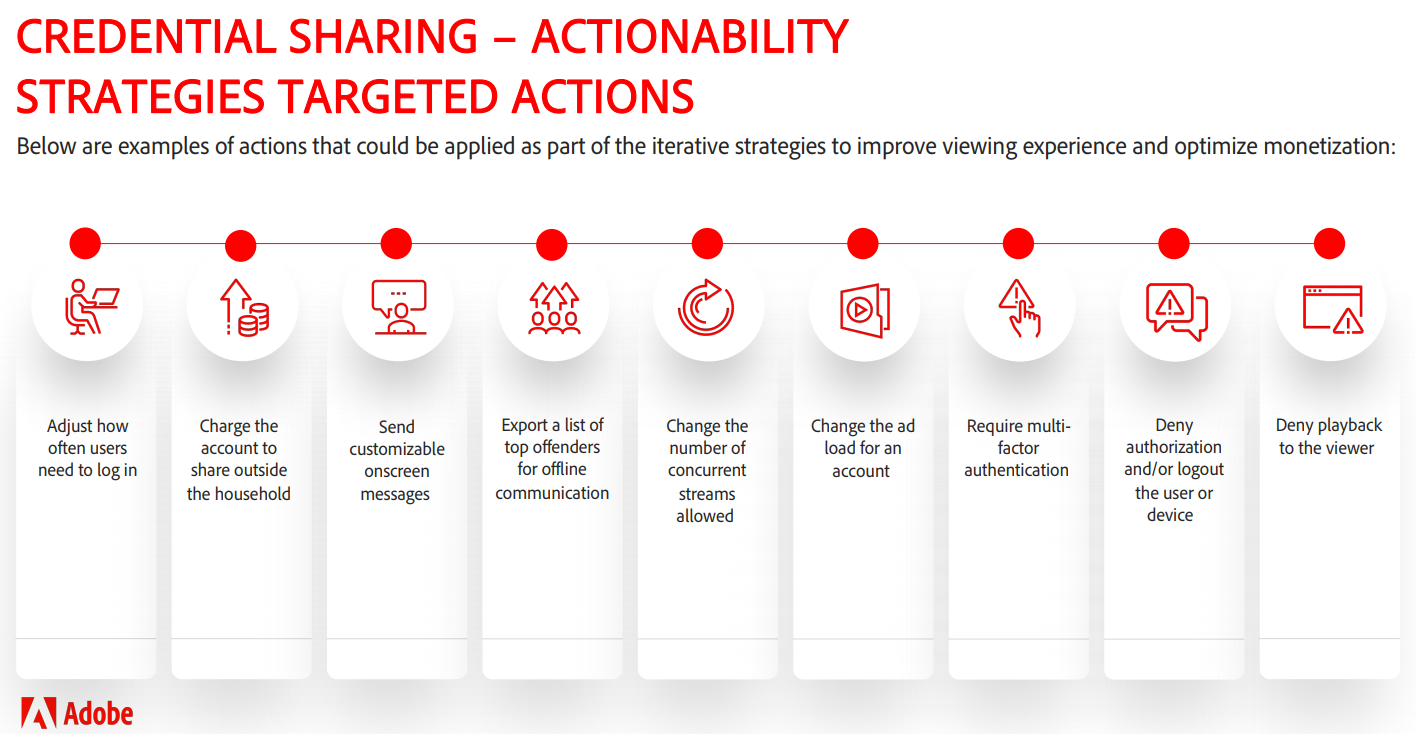 That leads to the question of how much customer information Adobe would need to ensure that the right accounts are targeted, with the right actions, at the right time.

Adobe’s Account IQ is powered by Adobe Sensei, which in turn acts as the intelligence layer for Adobe Experience Platform.

In theory, Adobe will know more about a streaming account than those using it, so the company should be able to predict the most effective course of action to reduce password sharing and/or monetize it, without annoying the account holder. 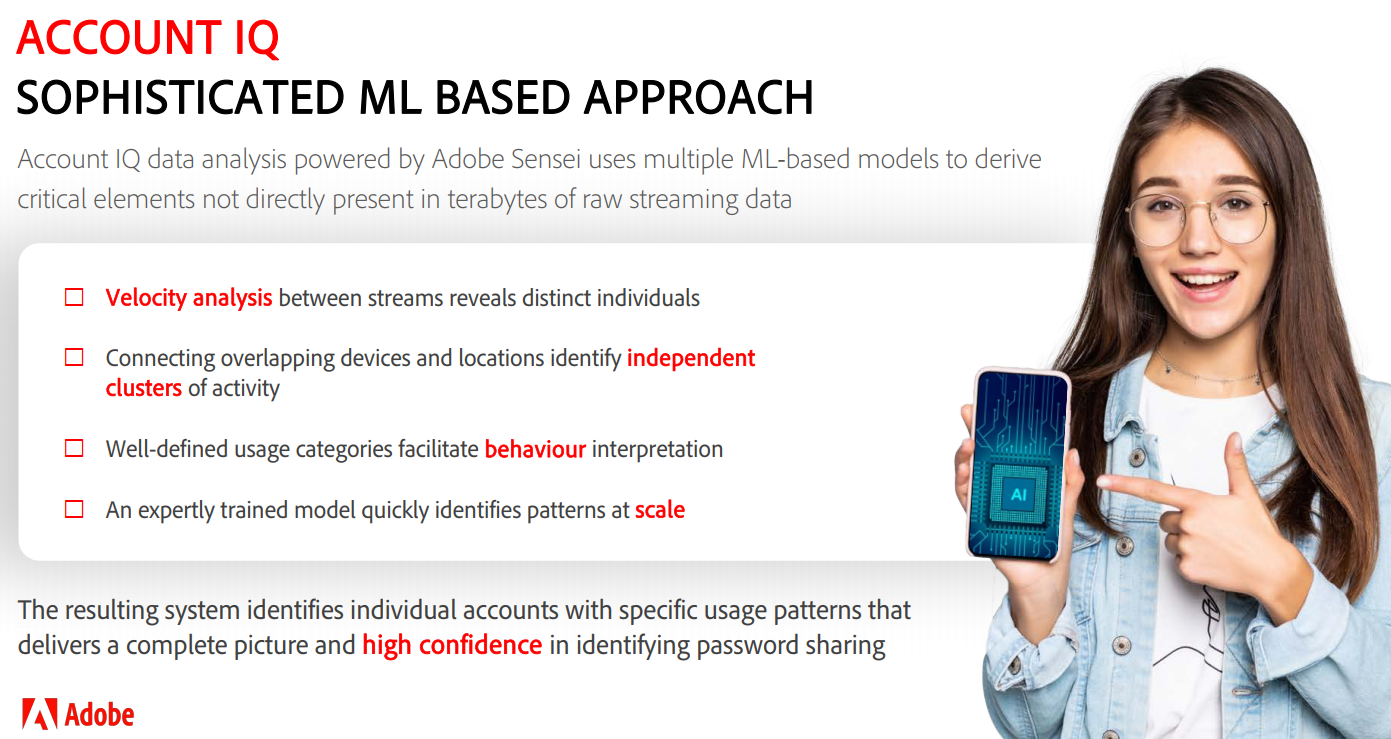 But of course, if you’re monitoring customer accounts in such close detail, grabbing all available information is the obvious next step. Adobe envisions collecting data on how many devices are in use, how many individuals are active, and geographical locations – including distinct locations and span.

This will then lead to a ‘sharing probability’ conclusion, along with a usage pattern classification that should identify travelers, commuters, close family and friends, even the existence of a second home.

Given that excessive sharing is likely to concern platforms like Netflix, Adobe’s plan envisions a period of mass account monitoring followed by an on-screen “Excessive Sharing” warning in its dashboard.

From there, legal streaming services can identify the accounts most responsible and begin preparing their ‘graduated response’ towards changing behaviors. After monetizing those who can be monetized, those who refuse to pay can be identified and dumped.

Or as Adobe puts it: “Return free-loaders to available market”. 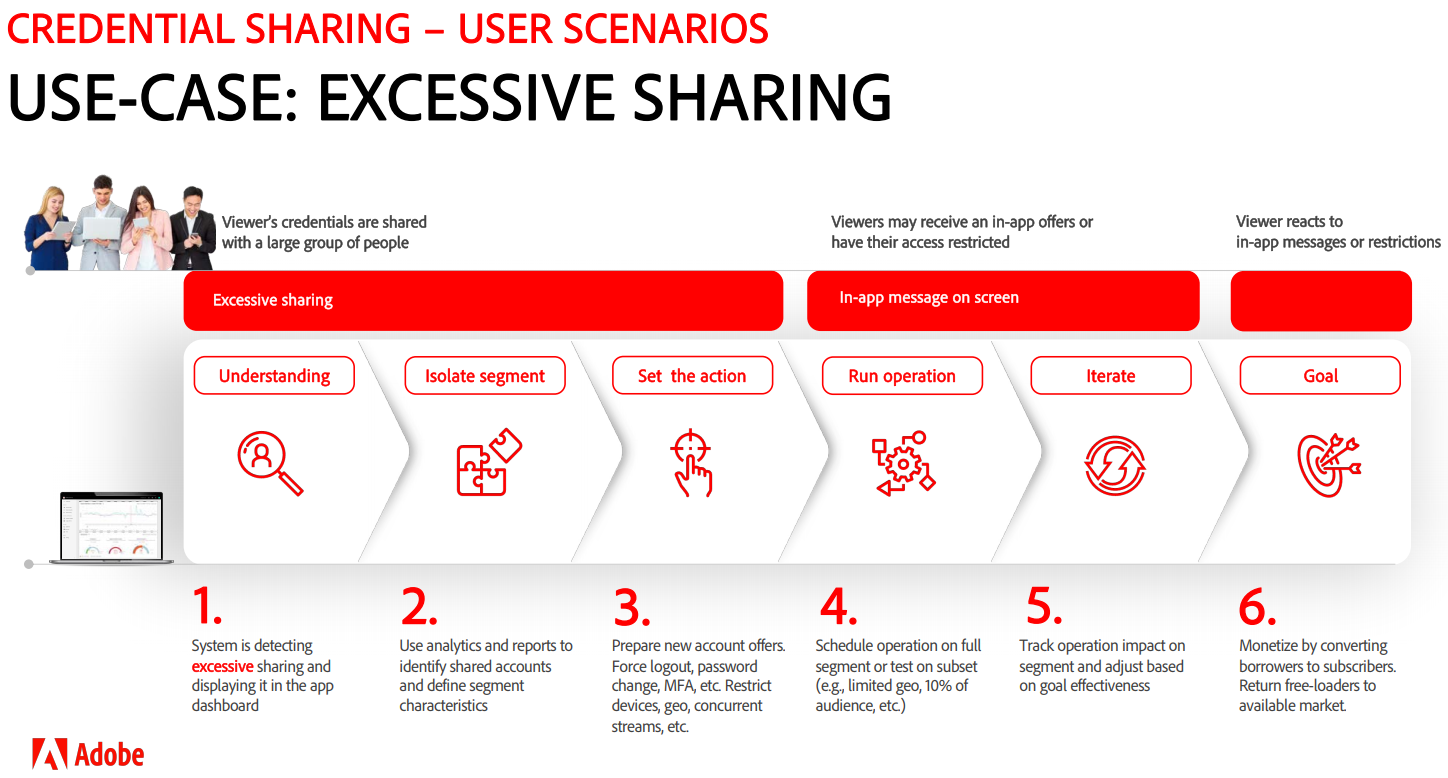 Finally, Adobe also suggests that its system can be used to identify customers who display good behavior. These users can be rewarded by eliminating authentication requirements, concurrent stream limits, and device registrations. As an added bonus, all good users can be given a hefty 50% subscription discount.

The discount part is admittedly a poor attempt at sarcasm on my part, but the rest of the paragraph is entirely genuine.

It appears to suggest that customers who use their accounts as agreed, will be able to do so in peace. On top they will be rewarded with a whole bunch of new freedoms to enjoy, specifically those that could propel them directly to the ‘password piracy’ naughty step and associated corrective measures.

Having said all that, please relax and have fun watching the movie. Any aggressive monitoring is for the greater good (of streaming platforms) and to ensure that customers get exactly what they paid for – not a fraction more.

Pirates Seem Happy to Trust Applinked But Caution May Be Advised

Scammers have been around for centuries but, on the Internet, they can reach broader audiences than ever. Most people are…

In 2017, Cloudflare CEO Matthew Prince decided to terminate the account of the controversial neo-Nazi site Daily Stormer. “I woke…