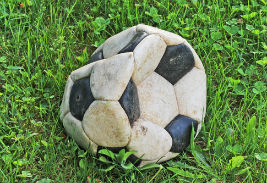 Perhaps most importantly, people who subscribe to legal services help to keep the game alive. They support the clubs they love, they support the players, and allow broadcasters to get a return on the money they invested in TV rights.

And make no mistake, TV rights are far from cheap.

On the downside, legal sports streaming services are very expensive, some would say disproportionately so. They can easily cost ten times the amount of a pirate service, despite the latter providing at least ten times more channels – x10. But at least legal services are more reliable than pirate offerings – in theory.

Mid-August we reported on remarkable situations in both Spain and Italy. At the start of the new season, after football leagues LaLiga and Serie A had warned fans not to use pirate IPTV services, fans who paid to access legal services found that they couldn’t watch matches due to technical issues.

For multi-billion dollar corporations, not being able to get matches to paying fans wasn’t a particularly good look, especially when pirate services were able to carry on business as usual.

But those two events were a one-off, or a two-off if we’re being picky. Until this week at least, when fans in France were treated to a similar experience.

Canal+ Couldn’t Keep Up With Demand

On Wednesday evening, France’s PSG faced off against Italian giants Juventus in the UEFA Champions League. PSG eventually came away with the spoils having won two goals to one. The match was available on Canal+ – or at least that was the plan.

Users who logged in early apparently had no issues but for those who tried to tune in just before the game started, things didn’t go nearly as smoothly. Just minutes after kickoff, Canal+ used Twitter to explain that it was unable to cope with the number of people trying to log in to the myCANAL app.

In keeping with football tradition, it only seems appropriate to criticize from the comfort of the touchlines (or couch), perhaps along the lines of: “So why did you sell that many subscriptions?” But that would, of course, be a little unfair – the unexpected can happen to anyone.

Unfortunately, an hour later Canal+ was back on Twitter again, this time with a red-faced emoji, having failed to sort out the mess, with half the match gone.

“Will it work again at 10:46 p.m.? What a shame! Refund the subscription! And tomorrow night, we do it again?” a frustrated fan responded. “We haven’t seen anything of the game. It’s nice to pay 50 bucks a month not to see the match you pay for,” complained another.

About Those Unreliable Pirate Streams….

People who didn’t pay to watch the match legally (and some that probably did) had no problem finding it through unauthorized channels. It was a conundrum outlined by a Twitter user who tweeted directly at Canal+ while its service was inaccessible. In summary: why am I paying you anything? 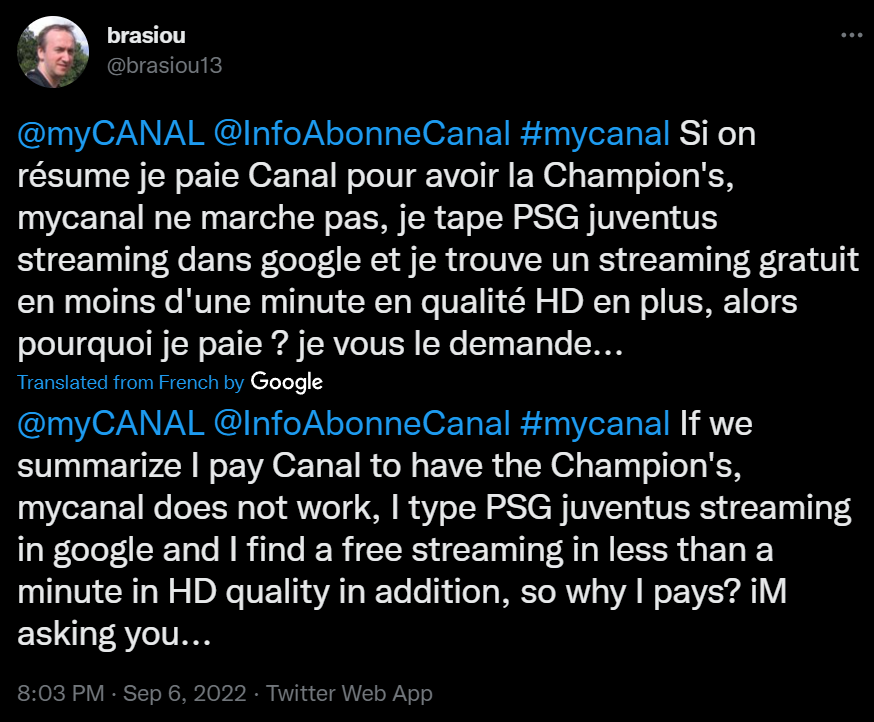 A report on Radio France reveals that pirates had plenty of choice.

“At half-time, we found that 50,000 spectators were following PSG’s first Champions League match via a Twitter account. Another live channel has nearly 6,000 views, more than double that for another. These figures were probably boosted by the MyCanal bug, which prevented subscribers from legally following the meeting,” the publication reveals.

According to the publication, Twitter did take some streams down but they reappeared in new tweets just a few minutes later and the reporter was able to watch the entire second half without any interruption. But the problem – or solution for myCANAL users – wasn’t confined to Twitter. Plenty of tweets linked to Telegram channels, where the match was also available.

“By following these links, we then came across a live stream, followed by more than 45,000 spectators. Within minutes, we were able to join nearly a dozen different conversations to watch the game,” Radio France adds.

The bottom line is that if legal services can’t get it right, illegal services are ready to step in and do their job for them. And the last thing legal services need is pirates playing the hero, because that never ends well.

Two years ago, Hawaiian anti-piracy lawyer Kerry Culpepper turned some of the most popular piracy brands into a powerful anti-piracy…