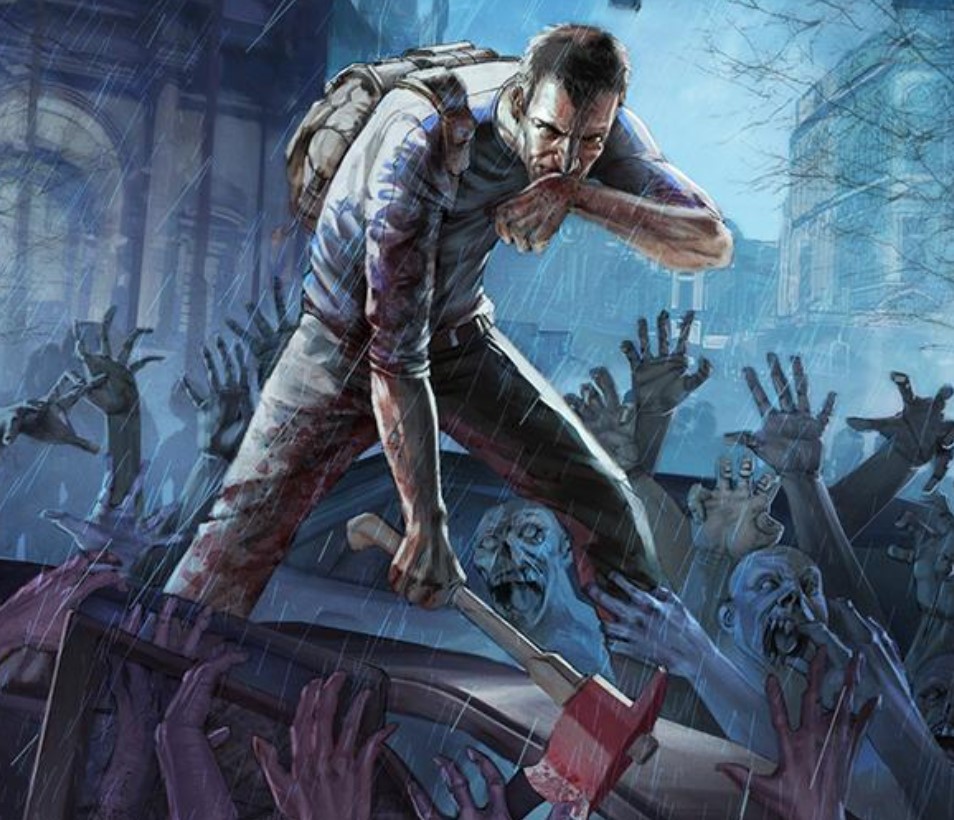 Over the years, Twitch streamers have been increasingly targeted by DMCA takedowns, which can cause quite a fuss.

Many of these copyright complaints are legitimate, meaning that streamers use copyrighted content without permission. However, there are plenty of mistakes too.

This week, a group of popular Spanish-speaking streamers organized a gaming event featuring “Project Zomboid“. This is a big deal for the indie game but, unfortunately, it was partly ruined by what appears to be a false copyright claim.

The issue was first raised by Menos Trece, who has over a million subscribers on Twitch and over two million on YouTube. After streaming Project Zomboid gameplay to tens of thousands of viewers, Twitch informed him that he had broadcasted copyright-infringing audio.

As it turns out, there was no problem with copyrighted music. Instead, a police or ambulance siren sound effect used in the Project Zomboid game was the culprit. This sound was claimed by an entity named “Dr. Sound Effects,” who apparently own the rights to a police car siren. 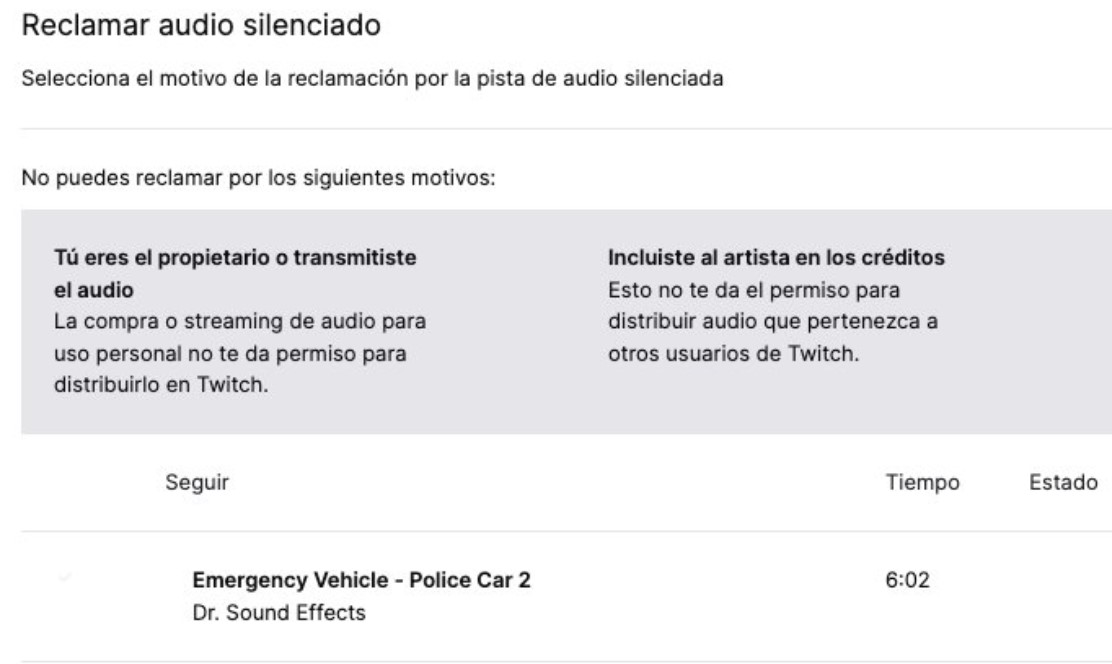 In response to this claim, Twitch muted portions of the stream’s audio, which is still the case to this day. Needless to say, Menos Trece wasn’t pleased with the surprise claim and the associated copyright strike.

The Indie Stone, who develop Project Zomboid, are not happy either. The indie developers swiftly responded to the issue on Twitter, suspecting that a “copyright troll” may be the culprit.

“Abuse of copyright system, copyright trolls have likely copyrighted a siren sound and this is likely picked up in a ton of games. Not much we can do about it really beyond make the siren not sound like a siren any more but we’re looking into it,” the developers tweeted. 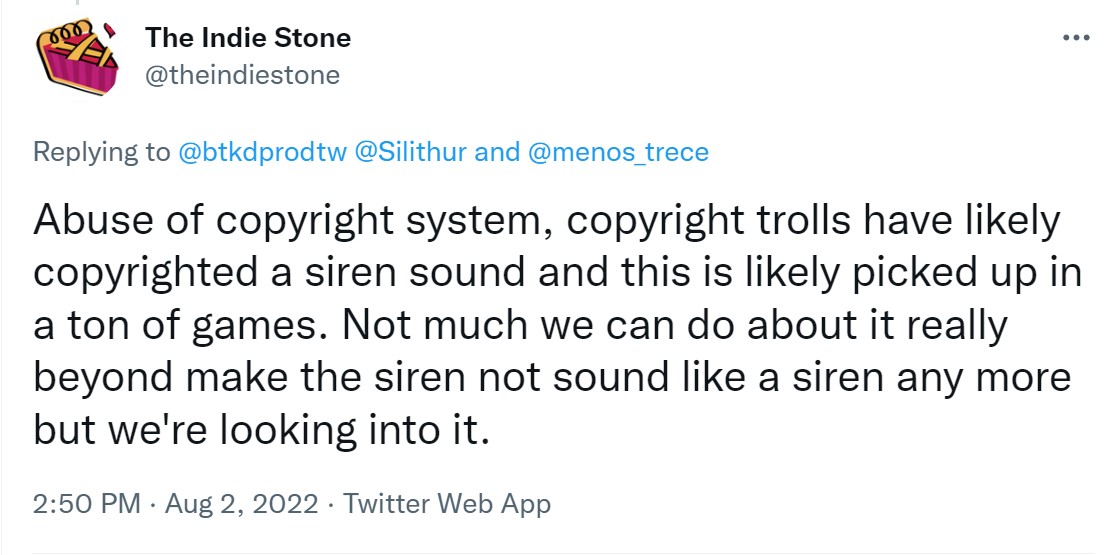 There is no evidence that this is a deliberate mistake. However, The Indie Stone confirmed that they own the rights to the sound effect and urged Twitch to correct the error. At the time of writing that hasn’t happened yet.

Menos Trece can still appeal the false claim as well, but that means sharing all sorts of private details with the streaming platform. In addition, it may open the door to a lawsuit in the US.

“To make a simple dispute, Twitch asks you for ALL your personal data and ‘threatens’ that you could go to court in the USA,” the popular gamer comments on Twitter.

Not The First Time

Unfortunately, these sound effect takedowns are not new. Similar problems have come up in the past with other games and Project Zomboid’s creators are familiar with it as well.

Earlier this year The Indie Stone reached out to Twitch, hoping to find a solution but the streaming platform wasn’t very helpful. Twitch uses the third-party filtering tool Audible Magic to spot infringements and can’t easily make changes to that. Instead, it advised affected users to challenge the takedown.

In other words, instead of fixing the problem, developers and streamers have to find a way to deal with it. That’s a convenient solution for Twitch, but a major frustration to the people who made the platform as popular as it is.

The Indie Stone is actually considering changing its siren sound effects to something that doesn’t sound like a siren to avoid false copyright strikes. In the meantime, they advise streamers to avoid police cars and ambulances.

“The Twitch copyright trolls have struck again, claiming ambulance sounds in the game – we’re looking into a streamer mode that will turn sirens into unconvincing synth sirens to stop this happening. Twitch need to have some exemption list or something.

“I’d stay away from police or ambulance sirens in the meantime till we get the streamer mode in,” the developers add.

Peru Teams Up With IFPI to Fight Online Music Piracy

Every year the US Trade Representative publishes a new update of its Special 301 Report, highlighting countries that fail to…

Backed by the RIAA, several major music industry companies have taken some of the largest U.S. Internet providers to court….

In early January 2012, many operators of successful, public file-hosting sites were looking forward to another productive year. Over the…

When local courts first grant copyright holders permission to block a pirate site, it is almost guaranteed that will be…