The Ultimate Fighting Championship (UFC) is the most recognizable mixed martial arts promotions company in the world.

The company’s events attract millions of viewers, some of whom are willing to pay big bucks to access monthly PPV events and even more money to watch live in often sold-out arenas.

For others, the costs involved are simply too steep. The UFC puts on a lot of events every year, which inevitably means some fans settle for highlights or find themselves tracking down widely available pirate streams. Another option is to go to a restaurant or bar where the fights can be enjoyed in a more communal atmosphere.

Broadcasting high-profile sports events can draw quite a few customers to these venues. This generates additional revenue, but not without incurring extra costs. After all, bars need an even more expensive license to legally show UFC PPV events in-house.

To avoid these costs, some establishments decide to take a gamble by showing UFC events without obtaining the correct license. This is a risky business as associated rightsholders often have spotters tasked with monitoring “pirating” bars and restaurants.

Joe Hand Promotions is one of these rightsholders. The company sells pay-per-view licenses for sports including UFC, Fox Sports Boxing, and WWE to commercial locations. The company is also responsible for taking legal action against venues that broadcast UFC PPV cards without paying for them.

Over the years, Joe Hand has sued hundreds of bars and restaurants in US federal courts. These lawsuits often result in settlements that can easily exceed ten thousand dollars. This sounds like a profitable business but not all cases result in a win and litigating federal lawsuits can be quite expensive.

UFC Copyright Battle at the Copyright Claims Board

So, when a cheaper option appeared in the form of the Copyright Claims Board (CCB), the UFC/boxing distributor was eager to give it a try.

The CCB is part of the Copyright Office and aims to make it cheaper for creators to resolve disputes. There’s no attorney required and the filing fee is limited to $100 per claim. The potential damages are also capped at $30,000 and those who prefer traditional lawsuits can choose to opt out.

When the CCB launched a few weeks ago we noticed that it was mostly used by smaller independent creators such as photographers. However, large companies can use it too.

This week, Joe Hand Promotions submitted six new cases to the CCB, all targeting bars and restaurants. These venues, including “Cabo Tacos & Beer”, “Fusion Spice Bar” and “La Barrita Bar” are all accused of broadcasting the 2019 WBA fight between Manny Pacquiao and Keith Thurman.

In addition, some of the bars also streamed UFC 240. Headlined by Max Holloway and Frankie Edgar, the main card was widely considered one of the worst of the year, but that doesn’t affect the need for a license. 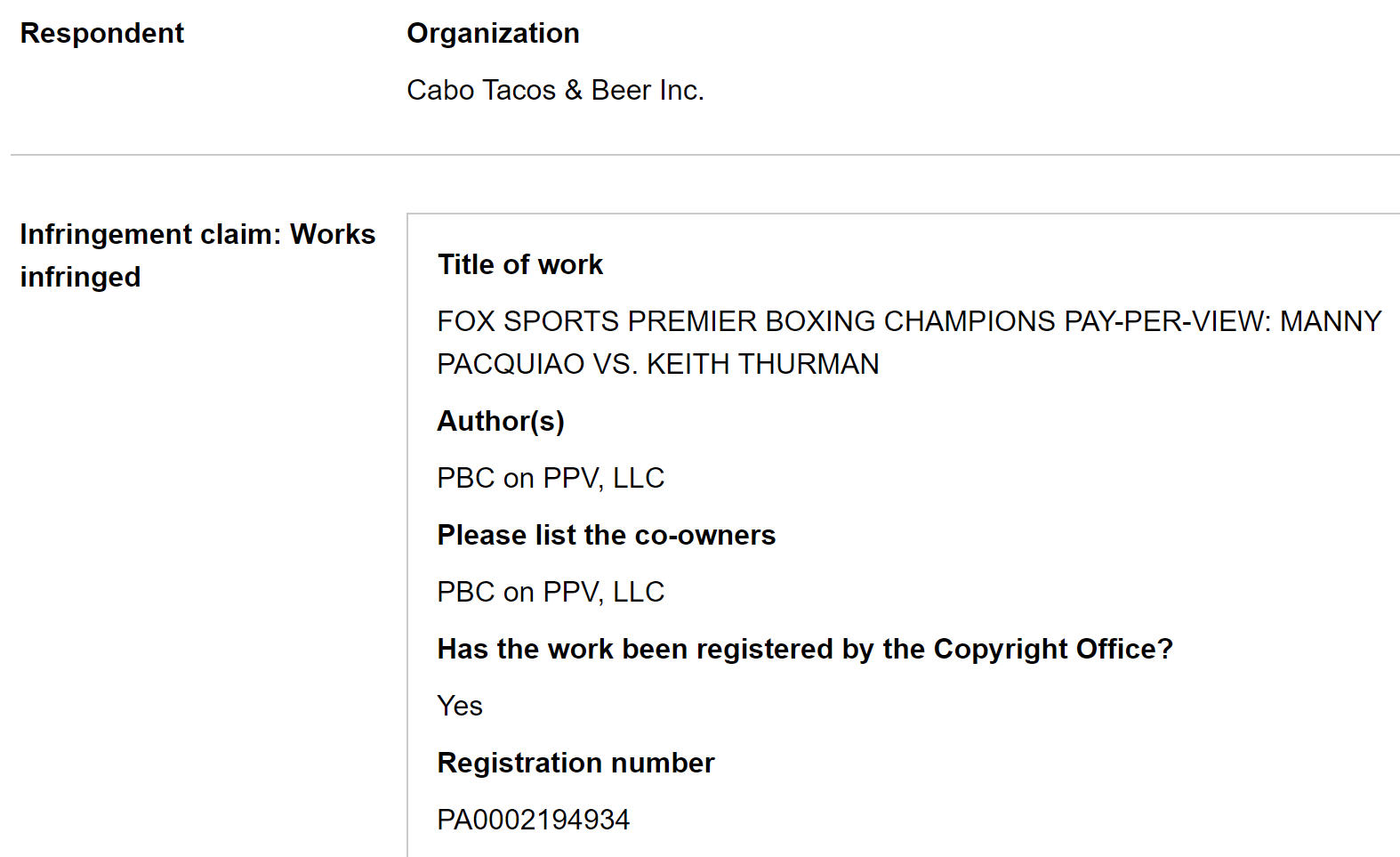 The claims were filed exactly three years after the Pacquiao vs. Thurman fight took place. This is important to note, as the statute of limitations on CCB cases is three years; these cases appear to have been filed just in time.

The accusations themselves are fairly straightforward. The venues are accused of showing the broadcasts to their customers without obtaining an appropriate license.

As compensation, Joe Hand Promotions seeks $15,000 in damages from the bars and restaurants, per infringement. Since some of the venues showed two fights, they face the maximum damages of $30,000.

The distributor argues that these damages are warranted as the infringing activity was willful, intentional, and purposeful.

The claims now lie with the three-member CCB tribunal, which will make a decision without the need for either side to have an attorney. If the defendants don’t want to participate they can opt-out, after which the case can still be refiled in federal court.

Joe Hand Promotions is the first major rightsholder to file a series of claims at the CCB. It will be interesting to see if more cases will follow. In any case, the total number can’t be higher than 30 per year, which is the maximum number of claims per copyright holder.

Hacking group Team-Xecuter was a thorn in the side of major gaming companies for many years. The group offered hardware…