For years, little was known about the scope of these copyright claims but that changed last December when the streaming platform published its first-ever transparency report.

The report covered the first six months of 2021 and YouTube recently released the second edition, which means that we now have access to the full-year statistics. This confirms the earlier finding that the streaming platform handles a staggering number of copyright claims.

Before diving into the numbers it’s good to clarify that YouTube has three main copyright reporting tools. The most basic one is a DMCA webform through which anyone can report an infringement. The second option is the Copyright Match tool, which is open to roughly two million channel operators whose content is regularly reposted.

The third and perhaps most well-known option is the aforementioned Content ID program. This service is the most advanced and works with reference files uploaded by rightsholders. Little over 9,000 rightsholders are approved to use this tool but, despite this limitation, 98% of all copyright claims on YouTube are handled through the system.

YouTube reports that it processed 759,540,199 Content ID claims in the second half of 2021, which is a slight increase compared to the months before. This brings the total number of claims up to nearly 1.5 billion last year.

Interestingly, a relatively small number of rightsholders are responsible for these claims. Between July and December last year, 4,840 copyright holders used the Content ID system. For comparison, the publicly available DMCA takedown webform was used by 272,815 rightsholders in the same period. 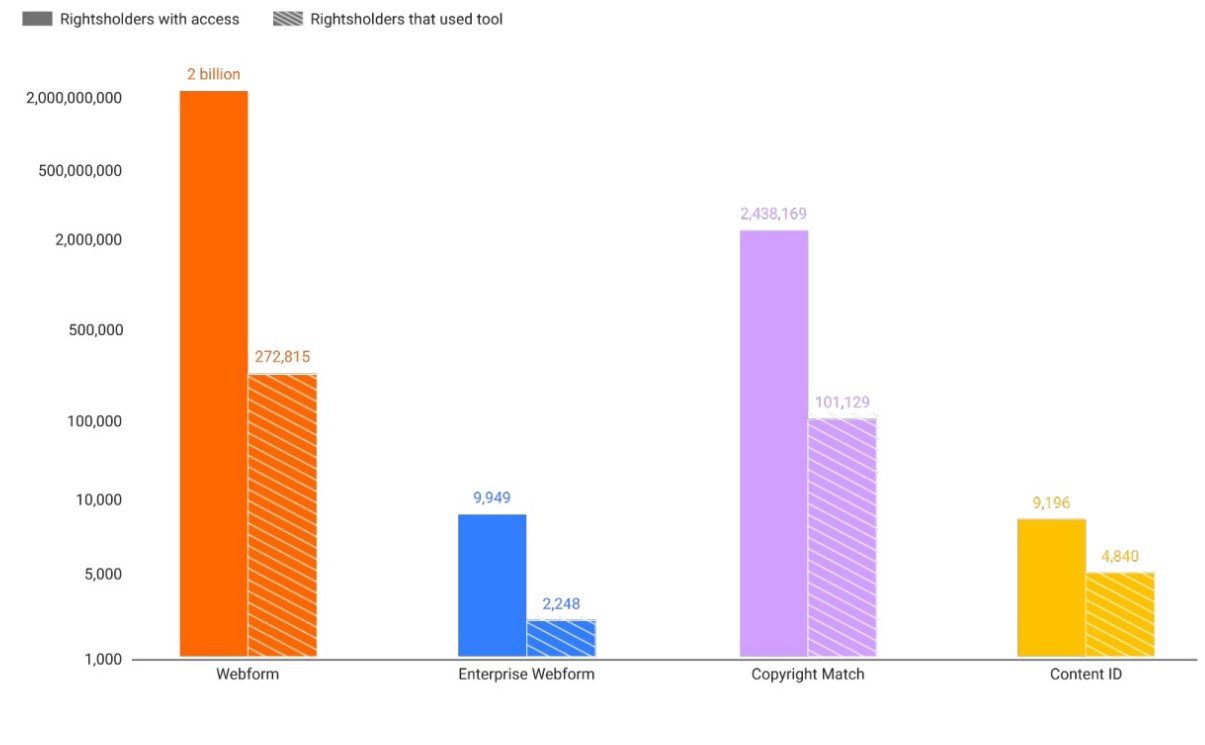 The graph below clearly shows that the relatively small group of Content ID users is responsible for the vast majority, roughly 98%, of all copyright claims on YouTube. The webform and Copyright Match tool each represent less than 1% of the total takedown volume. 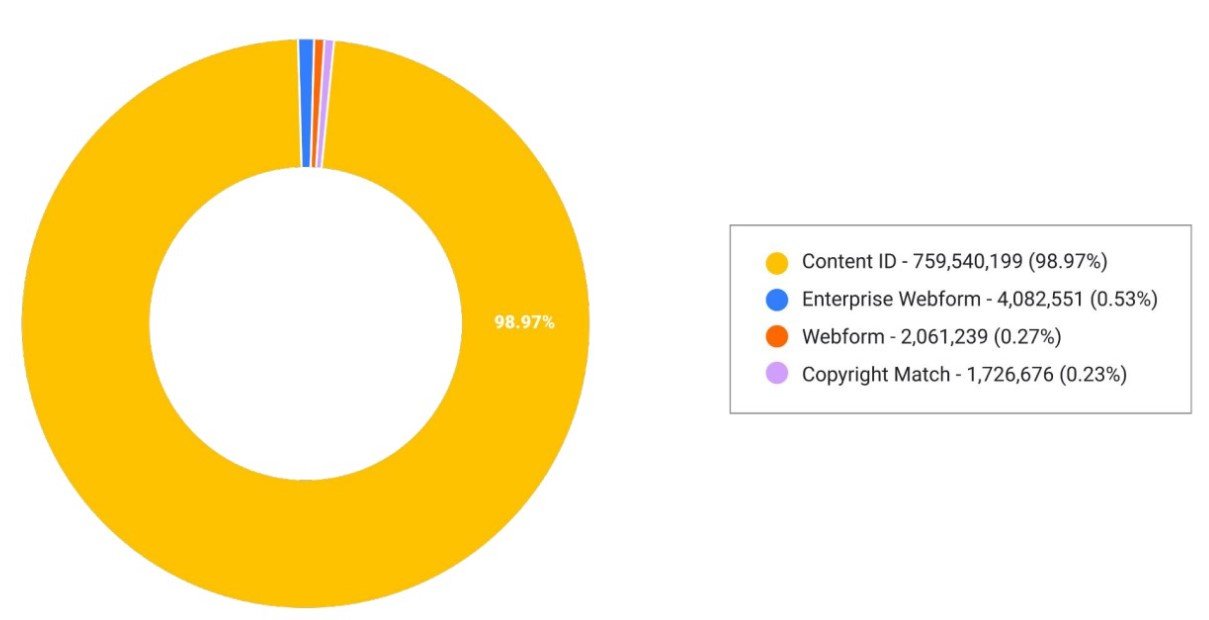 Another interesting finding is that nearly all of the Content ID claims (99%) are submitted automatically. In these cases, potentially infringing content is flagged based on fingerprinting technology with limited human oversight.

Automation saves YouTube and rightsholders a lot of resources. However, it is also a potential source of abuse and errors. This is one of the reasons why just a small group of verified and responsible rightsholders can join the program.

“This is especially important because claiming can happen automatically, and while one copyright request removal made from the webform impacts only one (or a handful) of videos, just one invalid reference file in Content ID can impact thousands of videos and users, stripping them of monetization or blocking them altogether,” YouTube reports.

Even with these precautions abuse can’t be ruled out. YouTube is riddled with videos complaining about mistakenly reported content. Even worse, scammers have used the system to flag content they don’t own. Flagged videos are sometimes monetized, in one case generating millions of dollars in revenue.

This monetization option is not just popular among abusers. Legitimate rightsholders have also embraced it as a tool to generate income. Of all the videos that are appropriately flagged by Content ID, 90% remain online, diverting the revenue to the rightsholder. In other words, copyright claims have become a serious revenue stream.

The vast majority of the Content ID claims go unchallenged, however, with recipients filing a dispute in just 0.5% of cases. While this sounds like a tiny fraction it still translates to 3.8 million disputed claims in six months. 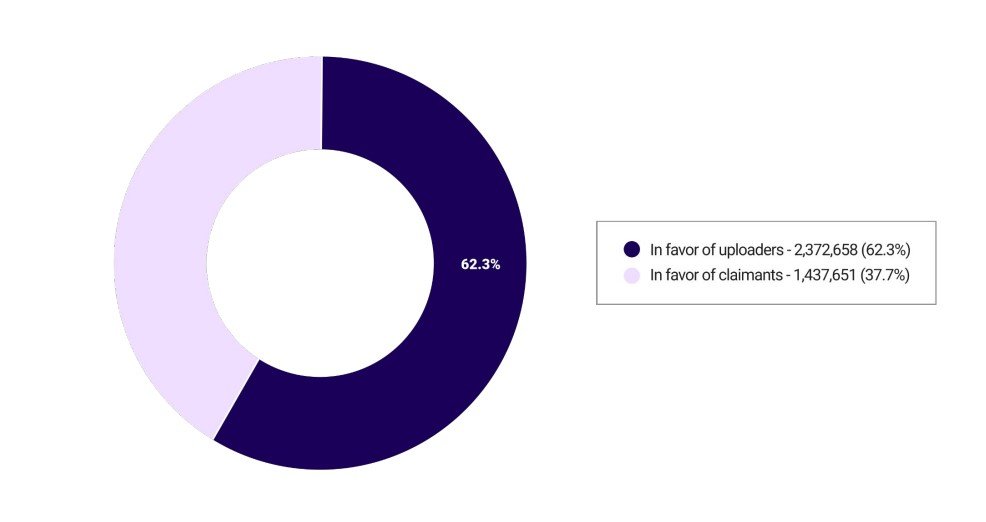 YouTubers have the option to challenge these claims, often with success, as 62% are resolved in favor of the uploader. If both parties fail to come to an agreement, the claim will leave the Content ID system, after which the rightsholder must submit a regular takedown request.

The data reported by YouTube give a good insight into the scope of YouTube’s copyright issues. Now that we have the first statistics for a full year, it will be interesting to see what trends develop over time.

YouTube Vanced App Forced to Shut Down ‘For Legal Reasons’

There are millions of websites available today, most of which remain completely unknown to the majority of internet users. If…

The Oscars are the most anticipated movie awards show of the year, closely followed by hundreds of millions of movie…

In recent years the European Commission has proposed and adopted various legislative changes to help combat online piracy. This includes…