There’s an old proverb that goes something like “An offended friend is harder to win back than a fortified city” and that “arguments separate friends like a gate locked with bars.”

Many of us have been there at some point in our lives but most of us don’t have more than 850K followers on Twitter watching our disputes play out in public. Megaupload founder Kim Dotcom does, and in recent weeks his irritation with two former friends and colleagues has started to boil over.

Kim Dotcom, Mathias Ortmann and Bram van der Kolk, appeared to be great friends and business partners when building and running Megaupload together. Even after the US Government tore the service down in 2012, the trio worked hard to launch New Zealand file-hosting service Mega in 2013, aiming to emulate Megaupload’s success, minus the legal bills.

What happened next is unclear but according to New Zealand’s company register, Dotcom resigned as a Mega director on August 29, 2013. Ortmann gave up his directorship on April 1, 2015, but along with colleague van der Kolk, he still works at Mega today.

During the summer of 2013, Dotcom declared he was done with Mega and was no longer a shareholder. He wanted to concentrate on building Baboom, the music platform concept formerly known as Megabox.

A year later, Dotcom severed all ties with Baboom. Dotcom’s shares in Baboom had been acquired by an early investor in Mega and just a few months later, Dotcom declared Mega “unsafe” citing a “hostile takeover by a Chinese investor.”

In the years that followed Dotcom periodically criticized Mega, including in 2016 when he repeated his claims of Chinese influence while warning users to backup their files. At the time, Mega chairman Stephen Hall said he didn’t know what was motivating Dotcom to make such comments but more than six years on, Dotcom is still making them.

Turning his attention to former colleagues Ortmann and van der Kolk, last week Dotcom publicly blamed them for his exit from Mega, claiming they had “stolen” the company from him. How this dovetails with previous allegations related to his major falling out with former Mega CEO Tony Lentino, who also founded domain name registrar Instra, is unknown.

Local media reports suggest that Dotcom hasn’t spoken to former friends Ortmann and van der Kolk for years but their recent deal to avoid extradition in the Megaupload case by pleading guilty to organized crime charges puts Dotcom in a tough spot.

“My co-defendants who claimed to be innocent for 10+ years were offered a sweet exit deal for a false confession,” he said last week. And he wasn’t finished there.

After a research team found that Mega was vulnerable to attacks that allow for a “full compromise of the confidentiality of user files”, Ortmann himself responded via a security notification stating that the issues had been fixed.

In response, Dotcom accused Ortmann and van der Kolk of creating “backdoors” in Mega so that the Chinese government could decrypt users’ files. “Same shady guys who just made a deal with the US and NZ Govt to get out of the US extradition case by falsely accusing me,” he added.

Whether this reference to the no-extradition-deal betrayed what was really on Dotcom’s mind is up for debate but whatever the motivation, he’s not letting it go. In a tweet posted yesterday, he again informed his 850K+ followers that the company he founded “is not safe” and people who think that their files are unreadable by Mega are wrong.

Shortly after, Dotcom delivered another message, one even darker in tone. It targeted Mega, the company he co-founded and where his colleagues still work. It’s possible to interpret the tweet in several ways but none seem beneficial to his former colleagues, Mega, or its users.

“In addition to security vulnerabilities a comprehensive report about mass copyright infringement on Mega with millions of active links and channels is in the works,” he said. 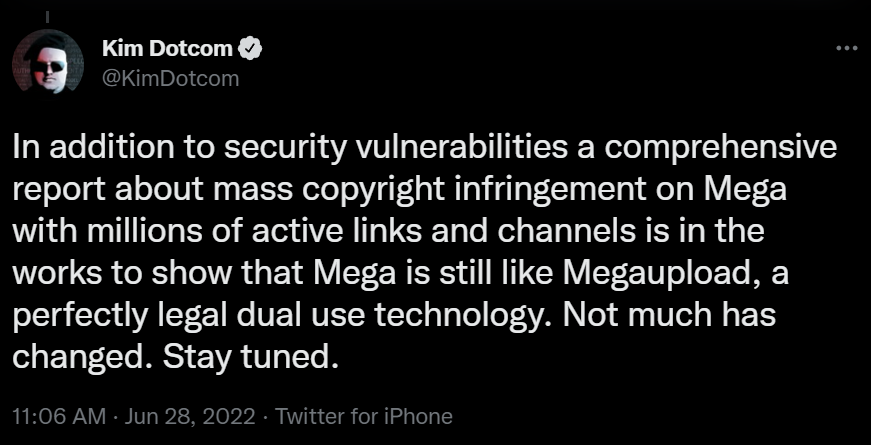 The production of a copyright infringement report related to Mega or Megaupload is something usually associated with Dotcom’s rivals. Back in 2014, a NetNames report did just that and was met with a fiery response from Dotcom’s former company.

In this case, however, Dotcom claims the aim of the new infringement report is to bathe Mega and Megaupload in the same light, to benefit them both. By showing their similarities, the report will demonstrate that “Mega is still like Megaupload, a perfectly legal dual use technology.”

Whether technology is indeed the crux of this particular problem is up for debate.

None of the charges to which Ortmann and van der Kolk pleaded guilty are technology-reliant but instead stand on a common basis of human intent. Barring technicalities, that’s often where complex copyright cases find themselves hanging in the balance.

But perhaps the most worrying thing about this new complication in an escalating dispute is its potential to affect the minority of users that actually store infringing files on Mega. Any detailed report of “mass copyright infringement” will draw negative attention directly to them, especially if the report includes active hyperlinks as Dotcom suggests.

Couple that with Dotcom’s allegations that the content of user files can be read, any conclusion that this upcoming infringement report hasn’t been thought through from a user perspective can be easily forgiven. That certainly wasn’t the case when users were invited to join the privacy-focused site when it launched.

“Let them look at Mega. There’s nothing to see (because) it’s all encrypted,” Dotcom told Reuters in 2014, scoffing at the prospect of another Hollywood lawsuit.

But even if user files can’t be read in the way Dotcom suggests, a detailed report of live, infringing links on Mega still raises issues for users. When Mega-hosted files are shared publicly, their links carry the necessary information to access the content and those files can be traced right back to user accounts.

As usual there’s a lot to unpack here, with many ifs, buts, maybes, and sundry moving parts. If nothing else though, perhaps the most important takeaway is that when friends start fighting over emotional matters, avoiding collateral damage isn’t always a top priority.

Most pirate sites and apps won’t survive without advertising revenue. This is why the advertising industry is seen as an…

Millions of people around the world use pirate apps on their mobile devices to stream TV-shows and movies. This is…

‘Wandavision’ Is The Most Pirated TV-Show of 2021

At the end of every year, we take a look at the most-downloaded TV episodes among torrenting pirates. For several…