The music industry has battled against various forms piracy for several decades, but it’s hard to root out.

Many of the enforcement efforts are targeted at services or tools that offer pirated content, but there are less visible copyright infringement challenges too.

In recent years music publishers have repeatedly spoken out against online platforms that use their music without a proper license. These include TikiTok and Roblox, among many others.

These giant platforms are just the tip of the iceberg, it seems. During its annual meeting in New York this week, the National Music Publishers’ Association (NMPA) stressed that copyright-infringing apps are a massive problem that should be dealt with sooner rather than later.

NMPA President and CEO David Israelite announced that the organization is launching a crackdown on apps that use music without paying for it. The music industry association has already sent cease-and-desist letters to nearly 100 apps that use copyrighted music without proper licenses.

The NMPA didn’t stop at sending warning letters. To show that it’s serious, the video maker app Vinkle was taken to court this week. In a complaint filed in the Northern District of California, the NMPA accuses the app’s creators of mass copyright infringement.

“Vinkle is in blatant violation of copyright law because it is built based upon a library of copyrighted musical works that Defendant neither owns nor has obtained a license to use,” the complaint reads.

“Defendant has brazenly copied voluminous copyrighted musical works to Vinkle’s servers, as the foundation for Vinkle, and provides them to users of Vinkle to incorporate into short ‘music videos’.” 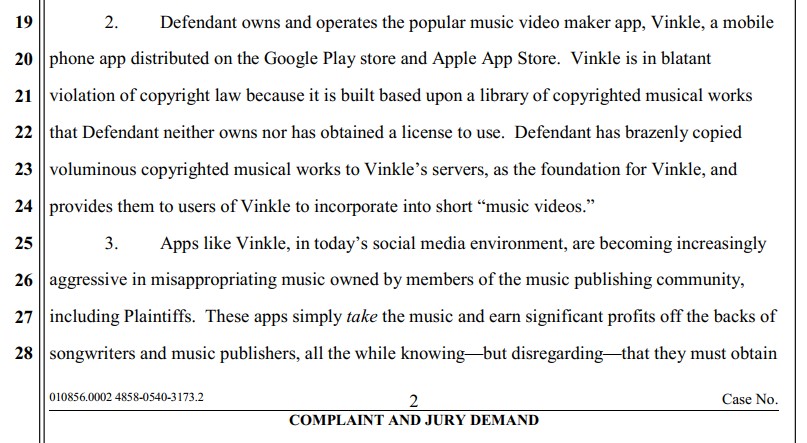 The NMPA notes that these types of apps are becoming increasingly aggressive in their use of unlicensed music. Such use is contrary to copyright law and a clear violation of Apple and Google’s policies.

As compensation for the alleged infringing activity, the music publishers demand compensation. With 55 works mentioned in the complaint, potential damages could reach $8.25 million.

‘Google and Apple Should Take Responsibility’

“[T]he responsibility of licensing music is not just limited to the app companies themselves. The app stores which empower these apps also have responsibilities to make sure that the apps that they make available to their customers are legal and not infringing,” Israelite said.

NMPA’s boss highlights that the association has never lost a lawsuit in its history. The association is confident that this new app crackdown will be successful and expects to see quick results.

According to Israelite, the app creators can either choose to license music or shut down permanently.

“If you are an app that is using music illegally, you can make the smart choice to resolve your transgressions and become a legitimate business partner, or you can shut down. There is no other choice,” he concludes.

App updates have become boring. In the past, new releases would almost always bring new features to your favorite Android…

In November, billions of people from all over the world will tune in to watch the FIFA World Cup in…

Sports piracy is prevalent around the world, with more than half of all sports fans regularly using unauthorized streaming services….

A few weeks ago we noticed that Google had removed several popular pirate sites from its search results. It started…