Tackling online piracy is a complicated endeavor that often starts by identifying the operators of infringing sites and services. This is also where the first hurdles come into play.

Most people who pirate still keep their identities concealed. This applies to the operators of sites and services as well as their users.

This relative anonymity is a nuisance to anti-piracy groups, including the RIAA. While most online services refuse to voluntarily hand over user details, there are some legal tools that can help rightsholders move forward.

In recent years, DMCA subpoenas have proven to be particularly useful. These requests don’t require any oversight from a judge and are typically signed off by a court clerk, in order to swiftly identify online pirates.

The Alliance for Creativity and Entertainment regularly uses these subpoenas to get more details on domain name owners and Cloudflare users, for example, but they can be used against other online services as well.

This week we spotted a subpoena request by the RIAA, filed at a federal court in the District of Columbia, requesting the personal details of alleged Discord pirates.

The legal paperwork reveals that the RIAA sent a takedown notice to Discord, asking it to remove several infringing files from its services. They included copies of tracks from Luther Vandross and The Stone Temple Pilots.

The RIAA also asked Discord to consider the “widespread and repeated infringing nature of the server operator” and to take appropriate action under its repeat infringer policy.

At the time of writing, the channel seems to have disappeared entirely, but it’s not clear whether Discord stepped in or its operator took action. What we do know is that the RIAA isn’t letting the alleged pirate or pirates go this easily.

Through the DMCA subpoena, which was swiftly signed off by a court clerk, the anti-piracy group hopes to identify the infringers. It’s not clear what the RIAA plans to do with the information, but the channel operator could in theory face legal trouble.

With the subpoena in hand, the RIAA reached out to Discord, asking it to share relevant personal information.

“We have determined that users of your system or network have infringed our member record companies’ copyrighted sound recordings. As is stated in the attached subpoena, you are required to disclose to the RIAA information sufficient to identify the infringers. 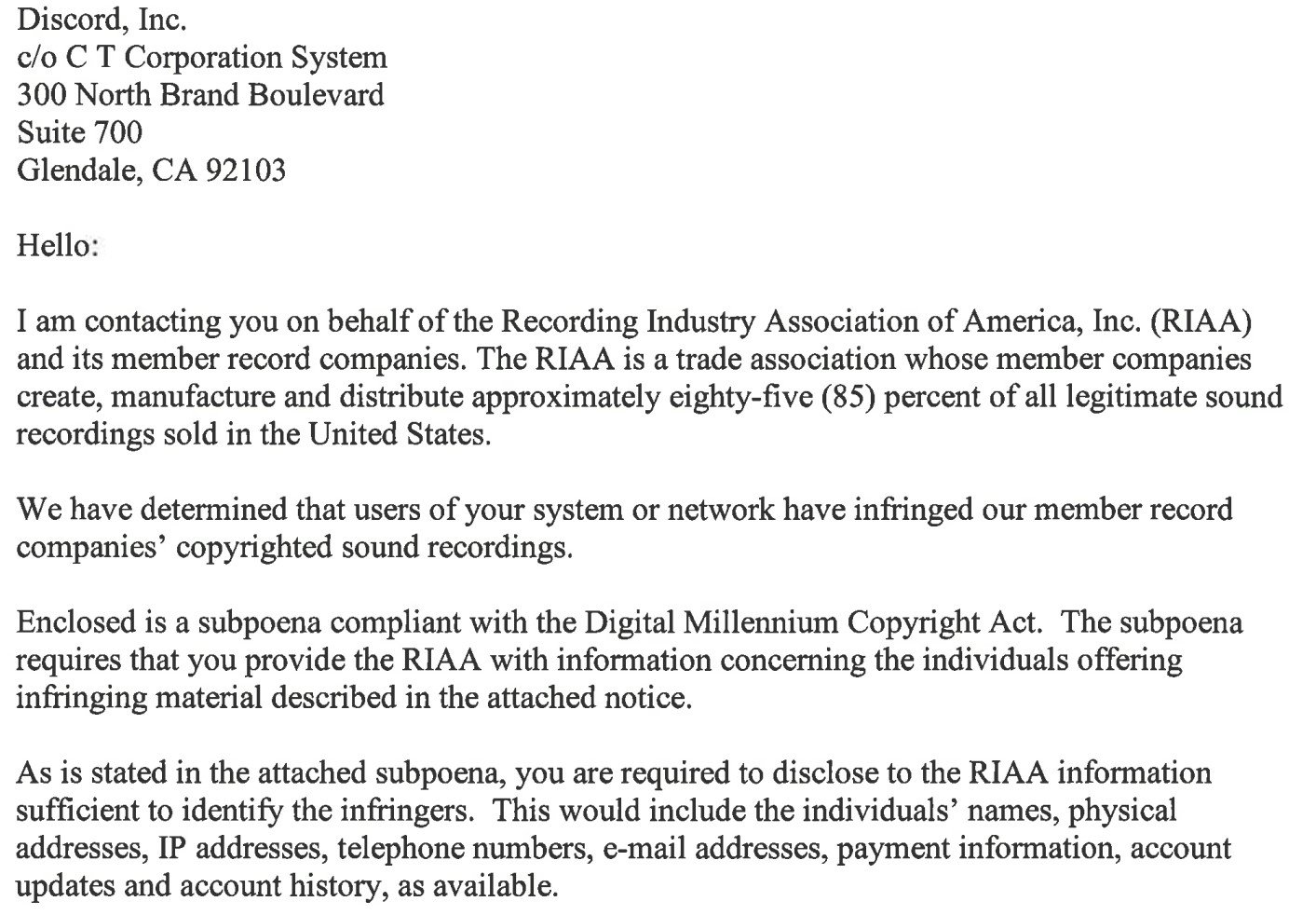 Whether Discord actually has all the requested information on file is unknown. That said, the RIAA’s efforts clearly show that Discord and similar services shouldn’t be regarded as safe havens for pirates.

It’s perfectly understandable that copyright holders don’t want pirated copies of their work circulating online. Most companies deal with this…

When fans want to get a brief idea of the nature and plotline of a movie they intend to watch,…

A few months ago, German Internet providers agreed to voluntarily block the most blatant pirate sites. The ISPs teamed up…

Absorbing knowledge online is essentially free but those who curate that knowledge may have their own plans on where, when,…

Pirate site blocking in the UK is now commonplace, with the movie, TV show, music, live sports and publishing industries…