The non-fungible token (NFT) craze that’s been sweeping the internet for months now is a truly sight to behold. Huge sums of cryptocurrency are traded for these often Ethereum blockchain ‘items’ alongside dreams that one day they will be worth substantially more.

As a result, the hype around NFTs (particularly where they relate to some kind of art) has reached astonishing levels, with new projects appearing all the time promising to revolutionize this and democratize that. Since the music industry is often criticized for not doing enough to support artists, some platforms have decided they can do better.

Thus far, it hasn’t gone well. Early February the RIAA stepped in to issue a cease-and-desist against HitPiece.com, describing it as a scam site designed to mislead and defraud fans with its offer to sell them NFTs genuinely associated with artists. According to their RIAA, that certainly wasn’t the case.

With HitPiece now in some kind of hibernation, another NFT-focused platform has been thrust into the spotlight afting launching this month. NFT Music Stream promises a “new chain of sound” alongside pledges to bring artists, fans, distributors and labels together “in one single beautiful, efficient and transparent” NFT music platform.

“NFT MUSIC STREAM is a fun, exciting private NFT Music platform where content creators can charge for audio & music content and get paid in crypto. It gives investors the freedom to distribute, monetize, and stream audio via our NFT MUSIC Streaming Platform,” the service says.

“We have established a decentralized music distribution and royalty management system to better reward artists and their fans. NFT Music Stream connects fans directly with artists in a beautiful music player interface.”

That music player was available on Streamer.fm but despite its claims to help “cut out the middle man” to give artists a greater share of the spoils, many quickly realized that something was amiss. According to the masses of complaints from artists on Twitter, few – if any – had agreed to have their music placed on the platform.

Composer Kerry Muzzey, for example, took to Twitter to complain that the new streaming service had no rights to monetize his copyrighted works. However, after an unspecified number of DMs to the @nftmusicstream account, they blocked him along with many other artists making similar complaints. 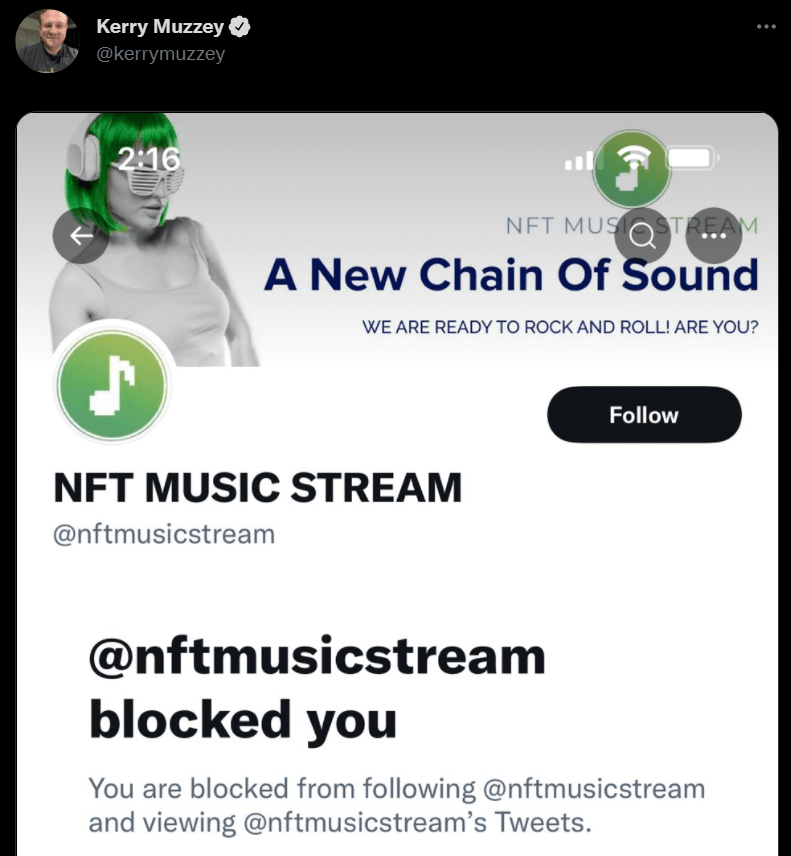 Muzzey responded with a strongly-worded cease-and-desist notice and he wasn’t the only one.

Of course, big questions remained. Why did NFT Music Stream believe it had the rights to distribute artists’ content without their explicit permission? Equally, where was it getting its music and artwork from to populate its music player? And, indeed, was that licensed in some way, and if so, by whom?

Given that NFT Music Stream’s White Paper is just six pages long and provides almost no useful information about anything, it was up to the more technical among artists to have a quick look under the hood. That didn’t go well either.

Posting on Twitter, @shyphomusic expressed their concerns that the “next evolution in the industry” was actually a “glorified frontend for YouTube.” Another claimed that the site’s code used a domain owned by Spotify for API use.

With the YouTube claim raising a number of eyebrows, artists pressed NFT Music Stream on the details. Surprisingly the company quickly admitted that rather than the “decentralized music distribution” system mentioned in its advertising, its player is indeed a front-end for YouTube, accessed via a “bulk subscription“, meaning that when a track is played, “royalties are paid to the artist via their agreement with YouTube.”

When the question of artist consent was raised, the company said that since artists had given YouTube permission to show their content, NFT Music Stream had permission too.

“The artist did consent to make their music available to YouTube who charge us to use it and pass the royalties back to the artist. We do not make NFT’s from it. We do not profit from it. A music NFT can ONLY be made from music directly uploaded and minted by the artist themself,” the company responded.

“If you don’t want your music being provided as part of a subscription service you can cancel your agreement with them. That said, email our support team with proof of ownership / representation to remove it,” the service bluntly added. 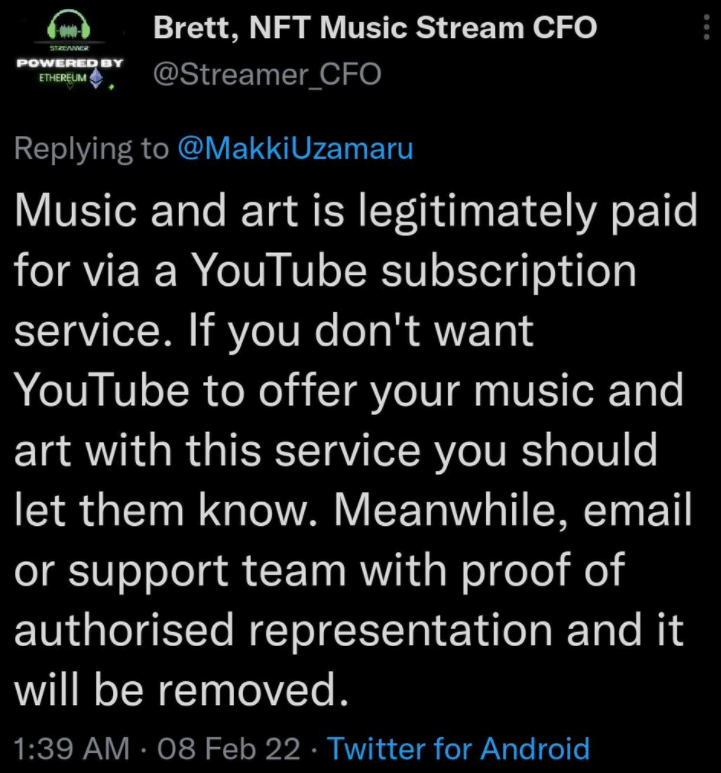 Given that NFT Music Stream is now on record saying that it doesn’t make any NFTs from the artists’ content pulled from YouTube, the big question is why it was put on the service in the first place. NFT Music Stream said that many users are “missing the point of the project” which is an interesting take given that the artists it’s claiming to support clearly haven’t been sufficiently briefed.

“Firstly, we have not profited in anyway from Musicians and Artists, in fact we have lost money as we pay YouTube Music (not to be confused with YouTube directly) the rights to host the music who then pays the royalties accordingly. Our goal is for the future where artists get to keep 98% of streaming profits through NFT distribution,” they added.

With artists in general clearly outraged with the launch and baffled by the business plan, NFT Music Stream also managed to annoy musician and musicians’ rights champion David Lowery. Not just because he was annoyed on artists’ behalf, but because his music was also made available on the platform without his express permission. 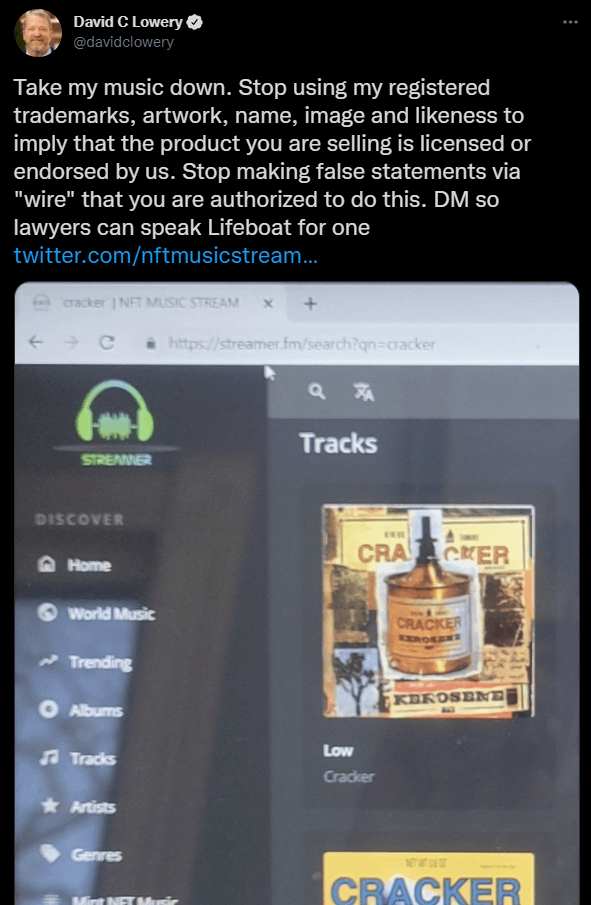 “Don’t blow me off,” Lowery warned the platform. “In case you aren’t familiar with my work,” he added, linking directly to an article detailing his class action lawsuit against Spotify which cost the streaming service tens of millions of dollars.

Only making matters worse, the artwork in the screenshots posted by Lowery point to what appear to be unauthorized uploads of his music on YouTube. This suggests that no matter what mental gymnastics are applied to NFT Music Stream’s music player service or business model, Lowery is unlikely to see a penny from either of them.

A worse start to a pro-artist service is hard to imagine but all the signs suggest it won’t be the last.

10 Years Ago the Feds Shut Down Megaupload

At the end of 2011, Kim Dotcom dropped the “Megaupload Song.” The track, a blatant promotional piece for the file-sharing…

At TorrentFreak we do our best to keep readers updated on the latest copyright and piracy news, highlighting issues from…