The status of YouTube as the most popular resource to stream free (or at least ad supported) music is a well-established fact.

However, there are millions of users online today who would prefer to download music for keeps and that has resulted in a buoyant market for so-called YouTube-to-MP3 ripping services. Possibly the most popular platform in this sector is Y2Mate.com but developments this week have raised questions over the site’s future.

Millions of Users See a Shut Down Message

According to SimilarWeb stats, more people visit Y2Mate from the United States than any other territory. Indeed, around 12 million of its 128 million users do so every month. But, at the time of writing, many (if not all) of those visitors are being informed that as of August 1, the Y2Mate service has been discontinued. 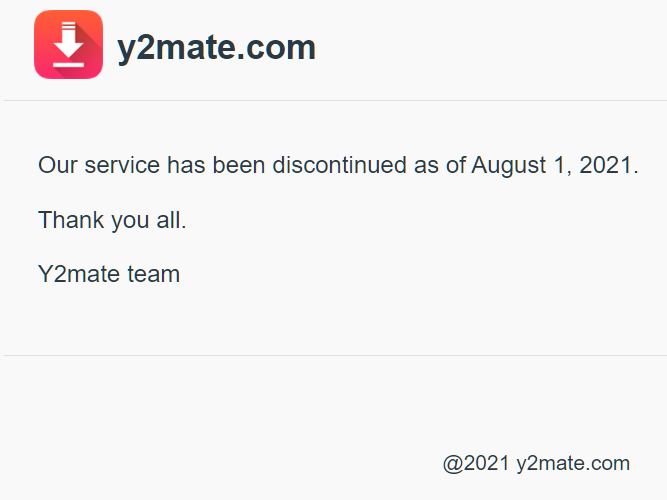 With so many of Y2Mate’s users seeing this message, one could be forgiven for thinking that the show really is over. Add into the mix that visitors from the UK are also seeing the same notice, then the writing really does seem to be on the wall. However, upon closer inspection, the announcement is much less global and final than it first appears.

Y2Mate Has Not Shut Down – It Appears to Be Geo-Blocking

Geo-blocking is something closely associated with legal streaming services that have obtained content but do not have the appropriate licensing to show it in a particular region. That isn’t something that usually bothers stream-ripping platforms but in this case, Y2Mate does appear to be discriminating based on location.

In our extended tests, countries such as Albania, Algeria, Argentina, Austria, Belgium, Canada, China, Czech Republic and Denmark do not see the shutdown message. The same applies to Italy, Ireland, Germany, and the Netherlands. Visitors from Mexico – the second most popular region to access Y2Mate – are also free to use the site, as are users from Spain, India, and Japan.

Indeed, as far as our tests go, Y2Mate is only blocking visitors from the United States and United Kingdom. Visitors from Australia do receive a ‘site blocked’ message but only because of an earlier ISP blocking injunction obtained by Hollywood.

This raises the question of why the site’s operators appear to have taken targeted action against visitors from the US and UK.

Geo-Blocking Can Point To Legal Issues

Traffic from the United States to Y2Mate has been on the increase lately so it makes no direct commercial sense to block those visitors. However, there are clear precedents in the ripping sector that show that geo-blocking can be directly linked to legal action.

In 2017, the world’s leading YouTube ripping site, YouTube-MP3, shut down following legal action initiated by the RIAA. A year before that, the service took the decision to block visitors from the UK after reaching an agreement with the BPI.

Just weeks after YouTube-MP3’s shutdown, more YouTube-ripping services took the same action by blocking UK traffic in an effort to avoid legal action. When such services choose to remain open for business in the UK, they can face enforced blocking, such as that recently experienced by Flvto and 2Conv.

Common Denominators are Usually the RIAA and BPI

With geo-blocking or enforced blocking often linked to action taken by the BPI, TorrentFreak has requested comment from the music industry group, which may be able to shine some light on why Y2Mate is blocking the UK. In the meantime, the RIAA’s war against stream-ripping sites in general offers the most plausible reason for Y2Mate blocking visitors from the United States.

According to Google’s Transparency Report, the RIAA has sent DMCA notices to have more than 9,300 Y2Mate URLs delisted from Google’s search results. That effort appeared to come to a halt last summer but the RIAA certainly isn’t finished with Y2Mate.

More than a year before that, the RIAA obtained DMCA subpoenas from a court in the United States aimed at uncovering the personal details of the people behind Y2Mate, which at the time was receiving around 64 million visits per month globally.

It’s not clear whether that effort bore fruit but in October 2020 the RIAA obtained another set of DMCA subpoenas against Cloudflare and Namecheap, again seeking information on Y2Mate’s operators.

Back in 2019, DMCA notices citing the anti-circumvention provisions of the DMCA were relatively rare but the RIAA has been using this method of attack against Y2Mate and similar sites ever since.

With the targeted platforms continuously updating their URLs, that descended into a game of whack-a-mole, which failed to have the desired result. Indeed, despite being one of the main targets, Y2Mate managed to increase its traffic massively.

Presuming the current decision to block US and UK traffic doesn’t expand to other regions, Y2Mate could in theory lose 15+ million visitors per month. However, the fact that the site hasn’t actually shut down means that anyone with the means to circumvent a geo-block (via the use of VPNs or proxies, for example) can still access the site.

Whether this will be enough to fend off any legal action or satisfy the terms of a potential settlement agreement is currently unclear. The BPI and RIAA are yet to make any statement that might shine light on the situation but when we hear back, we’ll update this article.

With millions of visitors, YTS is one of the most-visited torrent sites on the Internet, even rivaling the legendary Pirate…

Hollywood and Netflix Report Top Piracy Threats to US Govt